MSNBC’s Todd: Hillary’s Team More Focused on Her ‘Brand’ Than 2016 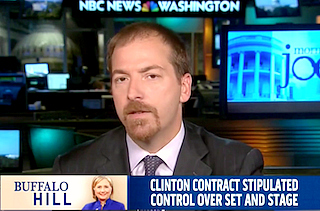 Discussing presumed 2016 presidential candidate Hillary Clinton’s troubled book tour, which has seen her deflecting bad news cycle after bad news cycle over her wealth and astronomical speaking fees, NBC News political analyst Chuck Todd surmised on Morning Joe Thursday morning that Clinton’s team was more focused on protecting her “brand” than how to get her past the Democratic nomination and general election.

“This book tour, and all of these decisions to go out and basically make your post-presidential money before you run for president?” Todd continued. “It tells me there is nobody around Hillary actually thinking every single day: ‘What’s good for her to become President of the United States?’ I think there are people around her say, ‘How do we protect Hillary Clinton and how do we help Hillary Clinton, the brand?'”

Todd thought that Clinton should have used her year out of office to travel the world speaking on women’s rights, rather than speeches to trade organizations and Wall Street firms (among others).