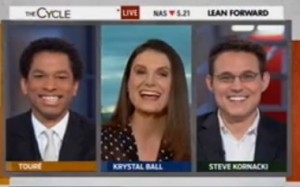 Earlier this week, New York state’s The Journal-News caused a stir when it published the names and addresses of all pistol permit-holders in three counties (complete with maps), which was closely followed by that paper’s staff having their addresses published. On Thursday afternoon’s The Cycle, three of the co-hosts (S.E. Cupp had the day off) argued the merits of the paper’s decision, with Touré and Steve Kornacki defending the publication of the addresses, and Krystal Ball correctly dissenting.

Krystal Ball opened the segment by explaining that the information the paper published is “publicly available” (they aggregated the data from Freedom of Informtion Act requests), but said that the publication of the names and addresses “smacks of sort of naming and shaming responsible gun owners, and making them seem as if they’re criminals.”

Ball added, “I think this is a mistake that liberals make in this debate a lot. It feels like we’re conflating people who own guns with people who are criminals, and that’s why we lose on this issue a lot,” and asked if public records had been available to name Muslim Americans in the wake of 9/11, “would it be okay to publish their names and addresses, and make them targets?”

Touré called Krystal’s analogy a “false equivalence” (the two most overused words in the liberal vocabulary; by definition, things that are analogous are not the same), explaining that “being Muslim does not have a negative impact on me. Owning a gun has a negative potential impact on me.”

Touré also pointed out that publication of this information could actually enhance the deterrent factor of owning a gun, but his most effective argument was “I have the right to know, I think, who has a gun and doesn’t. Maybe I don’t want to go there, and my kids going there…”

Kornacki reinforced Touré’s point. “We treat guns as a private choice, but they’re really a public matter,” he said, rattling off statistics about gun deaths in the U.S., and adding, “I should be able to know, hey, there’s a gun there. I choose to not go there. If you have it for deterrence, you should want people to know, don’t come in here. we’re packing.”

On that point, Touré and Kornacki are spot-on, and if there were a law requiring gun owners to notify guests, and especially parents, that there are guns on the premises before allowing them in, I would support that. But that’s not what this was, as Krystal Ball alluded to next.

“I think when you publish people’s names and addresses in that way, in that context,” Bll said, “you really make them in to targets and that’s unfair. I’m reminded of Tom Perriello running for re-election, someone published what they thought was his home address on a blog locally, and a person went to that address and cut the gas line there. It was actually his brother’s house, who had children. Fortunately, they were out and thank God no one was injured but I think you have to be really careful, and again, that was publicly known information, but opening people up to be targets like that and treating them like criminals, they’re not sex offenders.”

The key distinction here is knowing the difference between information that is public, and information that is publicized. Pretty much everyone’s name and address are a matter of public record somewhere, but not everyone has a need to know them, or a legitimate purpose for knowing them. When you publish someone’s name and address, you’re exposing them to harassment, or worse, so if you’re going to do it, you need to have a very good reason.

Journalists have a duty to minimize harm. The Society of Professional Journalists’ code of ethics says that journalists should “Recognize that private people have a greater right to control information about themselves than do public officials and others who seek power, influence or attention. Only an overriding public need can justify intrusion into anyone’s privacy.”

The Journal-News may have grounds to believe that publishing these names and addresses satisfies a “public need,” but not one which overrides the potential for harm that goes with it.

Here’s the clip, from MSNBC’s The Cycle: