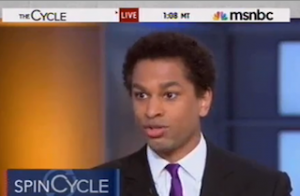 MSNBC’s Touré saw something a bit cynical about Sen. Rand Paul‘s filibuster on the issues of drones and civil liberties, calling the display “theatrical grandstanding” and arguing that the only goal it achieved was setting up Paul for the 2016 GOP presidential nomination.

“It going to play really well inside the conservative media bubble,” Touré said of Paul’s filibuster, perhaps referring to the praise it has already received from Michelle Malkin, Rush Limbaugh and others. “Rand Paul 2016 is looking pretty good,” he added, saying that even if he doesn’t get the nomination, he could act as a “magnet” to push the GOP field “rightward.” Touré welcomed this development because he believes it will make Republicans less “electable.”

Steve Kornacki saw the situation differently, saying it signaled the “mainstreaming of Rand Paul, Paulism and Paul’s views,” in that unlike Ron Paul, who often stood alone, Rand Paul was joined by several colleagues, including one Democrat, during his filibuster. Kornacki dismissed the opposition to Paul by Senators John McCain and Lindsey Graham as nothing but the old guard fighting the tide of change.

Touré fought back against the notion that what Rand Paul was doing Wednesday if any different from other mainstream Republicans have been promoting, notably “fear of the American government.” As Kornacki responded, assuming that fear exists, the Obama administration has begun to address it in light of the filibuster, demonstrated by the concise letter Attorney General Eric Holder sent to Paul today.