MSNBC’s Touré Blasts GOP For ‘Salivating’ Over Obama Scandals: ‘Potential For Overreach Is 100%’ 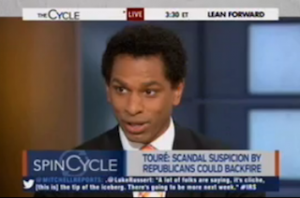 On Friday afternoon’s edition of MSNBC’s The Cycle, old co-host and new weekend anchor Steve Kornacki stopped by to help fill in for S.E. Cupp who was off for the day. The group’s “Spin Cycle” session over President Obama‘s scandals this week brought a sharp warning to Republicans from Touré: “The potential for overreach here seems about 100%.”

But it was Krystal Ball who first posited that the IRS scandal in particular doesn’t have the “staying power” with the American public that most pundits, including the all-powerful Nate Silver, are predicting it will. “Republicans are making the same mistakes that they made in the 2012 election,” Ball said, “which is assuming that the American people hate the president as much as they do.” She argued that most Americans won’t connect the actions of “low-level” IRS officials to the president or the Democratic Party is a whole, though she is “confident that Republicans will do their darnedest, a la Benghazi, to keep this thing going for months.”

Kornacki agreed that the IRS and other scandals wouldn’t have much of an effect on “persuadable” voters in 2014. But, the real question, he said, becomes, “is this going to be something that motivates Republican voters, motivates tea party voters, to get to the polls in what is otherwise a low turnout circumstance and boost them? Or is it a situation where, and we’ve seen this happen before, where Republicans go way too far and it provokes a back lash on the Democratic side that boosts their turnout in 2014 and hurts the Republicans?”

“Right now we have a GOP that is salivating,” Touré added, gleefully feeling vindicated in their decision that Obama is the “worst president who ever existed.” He focused in on two, diametrically opposed reactions from conservatives that could spell trouble for the GOP. On the one hand, Charles Krauthammer is warning the GOP to stop calling Benghazi Obama’s “Watergate.” On the other, Peggy Noonan is writing “we are in the midst of the worst Washington scandal since Watergate.”

“Is it Watergate or is it not?” Touré asked. “They can’t really figure it out. The potential for overreach here seems about 100%.” He said that with their current stance, the Republicans will never be able to work with the president to achieve something like immigration reform, which he believes could be their only chance to “change the demographics, to reverse the trend lines that we saw in 2012. If they continue with this all-white party and let the Hispanic and Latino voters go to the Democrats, then forget it, you’re not a national party anymore.”