MSNBC’s Touré: ‘I Am Not Pro-Drone, But I Am Pro-Killing Those Who Are Working To Kill Us’
video

MSNBC’s Touré: ‘I Am Not Pro-Drone, But I Am Pro-Killing Those Who Are Working To Kill Us’ 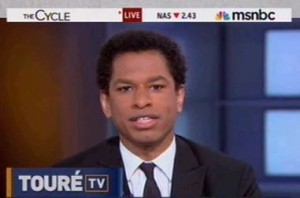 MSNBC host Touré got into a heated discussion with his The Cycle co-hosts on the roiling drone controversy early last week, during which he asserted that “If you join al Qaeda, you lose the right to be an American.”

On Monday’s edition of The Cycle, Touré elaborated on the complex issue, and accusations of “hypocrisy,” by explaining that “I am not pro-drone. But I am pro killing those who are working to kill us.”

He went on to explain how it is that a person can hold multiple opinions about a complex subject, a revolutionary concept in modern political discourse, concluding that “I am not pro-drone. I am pro-destroying al Qaeda. I am pro-protecting America. I am pro- a better drone program that is more transparent, more precise and more deadly. And I am pro ending this war as soon as we can.”

Part of the reason I haven’t written much about the very complicated issue of targeted drone strikes, a white-hot topic this week due to the confirmation hearings for prospective CIA Director John Brennan, is that a narrow statement like the one Touré made last week suddenly becomes “Touré loves drones, now!”

Since I haven’t been “okay” with much of what the United States has ever done in war, covering all the bases in a single commentary impossible. However, on its own terms, the terms that both “sides” have pretty much agreed to, the current debate over drone strikes is badly off-topic.

Much of the current debate centers around a memo detailing the legal rationale behind the targeted killings of American citizens, as summarized in a white paper obtained by NBC News. The first objection, then, is that American citizens, such as Anwar al-Awlaki and Samir Khan, are being targeted for drone strikes without due process of law. On that narrow issue, under current law, Touré is absolutely right, if you join an enemy force at war with the United States, it makes no difference if you were born in New Mexico or Mecca. If Congress doesn’t like that, the solution is not to clutch their pearls at John Brennan, it is for them to repeal, or amend, the Authorization for Use of Military Force. If you want due process of law, then stop treating terrorism as a war, and start treating it as a law enforcement matter.

There is also understandable concern over the killing of Anwar al-Awlaki’s 16 year-old son, Abdulrahman al-Awlaki, but opponents of the drone strike program have clouded the issue by either saying that the boy was “killed in a targeted strike,” or outright claiming that he was targeted, when all available information suggests that he was not the target. This does not make it “okay,” but it does render al-Awlaki’s U.S. citizenship irrelevant to this discussion. The target of that strike was Ibrahim al-Banna, an operative with AQAP. I agree, the United States should do more to avoid killing teenagers, or children, or any non-combatant, but we’ve been killing children in war with our eyes open for a very long time. If Congress doesn’t like that, the solution is to grow a stomach for more U.S. casualties, because that’s the risk it will take to engage this enemy more directly, with more certainty.

There are also concerns about the memo’s definition of an “imminent threat,” which includes the disclaimer that it “does not require the United States to have clear evidence that a specific attack on U.S. persons will take place in the immediate future.”

This does sound overly broad, but once you accept that those targeted are, in fact, terrorists, then you must decide when, exactly, a terrorist isn’t an “imminent threat.” If a convicted murderer strolls the halls of an elementary school, even if he hasn’t let on any specific plans, he is an imminent threat. A hostile military force is an “imminent threat” even if you don’t know its plan of attack. If Congress wants a stricter evidenciary standard, then the solution is to stop treating terrorism as a war, and start treating it as a law enforcement matter.

The final criterion for such a strike is that “capture is infeasible,” which, again, is a function of America’s aversion to putting our personnel in harm’s way. As Brennan noted during his hearing, any member of al-Quaeda knows that surrender is an option, as is death from the sky. If Congress doesn’t like this, again, then the solution is to stop treating terrorism as a war, and start treating it as a law enforcement matter.

The fact is, though, that Congress doesn’t have the political will to do anything but clutch their pearls at John Brennan, while conservatives’ only use for this issue is to draw false comparisons between the drone program and torture.

Here’s the clip, from MSNBC’s The Cycle: