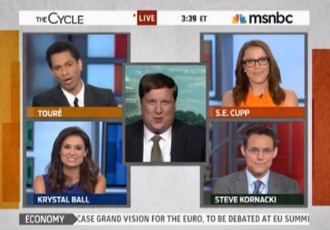 On Tuesday’s edition of MSNBC’s The Cycle, the four co-hosts discussed recent polls that show an increase in youth support for the Republican presidential candidate over 2008. The team interviewed College Republican National Committee Chairman Alex Schriver to figure out why more young people oppose President Barack Obama this time around.

Off the bat, co-host Krystal Ball expressed disbelief that any young voter could possibly support Republicans, given that President Obama has “made student loan interest rates and Pell Grants and health-care reform key parts of his platform.”

In Ball’s world, it seems young voters only care about how much cheaper stuff the government promises them. Both Schriver and conservative co-host S.E. Cupp failed to rebuke Ball’s claims, so I’ll do it for them: “Simply saying you’re in favor of cheaper tuition and more accessible health-care doesn’t actually make it so.” Or even simpler: “Good intentions don’t automatically mean good outcomes.” Or hey, why not: “Despite the president’s good intentions, some young people realize that Pell Grant expansion would lead to even higher college costs and that, so far, the president’s idea of health-care reform is tantamount to crony capitalism.”

The group then debated why the Republican Party has trouble connecting with younger voters, discussing mostly the disparity on social issues and Ball’s theory that Republican-backed voter ID laws turn off young voters. Eventually the attention turned back to guest Schriver, and Touré found it prudent to condescend to the 21-year-old for being some kind of young Republican mutant:

I generally find young Republicans to be a sort of strange breed. Most young people — regardless of who’s at the top of the ticket — most young people tend to be Democrats and it’s been that way for a long time. So when I meet a young Republican, I want to put him on the couch and say, ‘How did this happen to you, and how might you be saved?’ Can you talk a little bit philosophically about why you are a Republican? And, by the way, how old are you?

Schriver laughed off the mockery and explained his mysterious existence. But it’s really not that difficult to envision a young Republicans because, well, there happen to be people who don’t see the world the way Touré does. And some of those people happen to be in college.

Touré’s instinct that young Republicans are unusual is not completely unreasonable because culturally speaking, College Republicans do stick out like a sore thumb on most campuses. And to the average liberal, it may seem odd to be young and so fervently anti-abortion or whatever else; but hey, people are different — it’s worth keeping that in mind while hosting a national television show that focuses on debate.

For The Cycle, it appears it will be a challenge for Touré to comprehend how others — not just Republicans — could possibly disagree with him on key issues. I would imagine similar treatment for even people like me who spent their college years handing out newsletters explaining why Democrats and Republicans are both terrible; co-eds who attended libertarian “Students for Liberty” events where you’d hear thousands boo the names John Bolton and Ronald Reagan, and applaud drug legalization, all while extoling the virtues of a free market.

Do those students also need to sit down on Touré’s couch for some psychoanalysis?