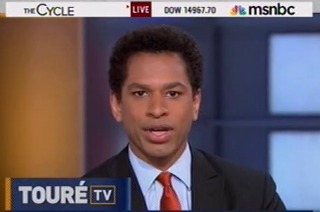 MSNBC’s co-host of The Cycle, Touré, declared his support on Monday for “the open borders movement.” While he says that the Senate’s immigration reform plan is a welcome development, it will never go far enough in making it easier for immigrant labor to come to America. Touré added that, just as currency and employment are borderless, immigration should also be borderless. He noted that chronic poverty plaguing foreign nations and fueling terrorism would be alleviated by open borders.

“The answer to our immigration issue is open borders,” Touré declared. “Tear down the fences. Rip up the red tape. Yup; I’m embracing the open borders movement.”

Touré said that the concept of open borders has been an economic principle for years. “Want to build cars in China? No problem. Want to make widgets in India? Go for it,” Touré said. “If it’s good for the global, corporate rich guys, why isn’t it good for the people? Especially, working-class people who want to vote with their feet and move out of corrupt, or mismanaged, or impoverished nations to go to countries that work for them?”

Touré said that some economists have claimed the “open borders movement” would more than double the world’s GDP. He insisted that taxes collected and the demand injected into the economy by limited, legal immigration is already a benefit.

Furthermore, Touré claimed, immigrants “don’t compete with US workers, they complement them – helping them do their jobs better.”

Touré added that those who claim open borders would result in an influx of dangerous individuals are falling prey to a canard. He said that the 9/11 hijackers and the Boston bombers entered the country legally. “It’s Muslim poverty that’s threatening our security,” Touré asserted, “not our immigration system.”

He said giving Islamic immigrants the ability to work in the US would diminish their anger, poverty, and general misapprehensions about America. “Just like corporations without borders has given the fat cats a better bottom line, people deserve the chance to be a full part of the global marketplace,” Touré concluded. “Open borders will improve the world.”