MSNBC and the Right-Wing Conspiracy
video 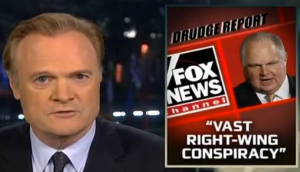 It’s 1993 again! Last night, Countdown fill-in host Lawrence O’Donnell ran a segment on the “vast right-wing conspiracy.” Riffing off of Bill Clinton’s Meet the Press appearance, in which the former president said that the conspiracy is “as virulent as it was” during his presidency, but not as big, O’Donnell and guest David Neiwert of Crooks and Liars went one further and agreed it was bigger and nastier. Does the claim hold up?

Who knows? But it’s presented simplistically on the show. The Fox News/Rush Limbaugh/Drudge Report graphic is kinda funny (apparently, no one knows what Matt Drudge looks like, hence the need for his site’s ugly logo), implying that they are some sort of axis of evil. O’Donnell’s argument that Fox News somehow issues the daily marching orders for the conspiracy is even more off. Though the right is, as Clinton says, out of power in Congress, the right-wing media’s ability to snap into focus on one or two messages of the day gives it continued power and relevance. But if you call that a conspiracy, it’s not one of the classic hub-and-spoke model; it’s something much more decentralized.

It’s arguably in MSNBC’s best interest as a network for Countdown to lay it on thick. Since the 2008 election, their ratings have slumped while Fox’s have shot up. Opposing the powers that be makes for better cable, but when the president and Congress are more or less aligned with you politically and the Congressional opposition is laughably ineffectual, there’s a lot of incentive to create an ur-power that is — a ‘vast right-wing conspiracy,’ if you will. So Countdown has turned to some classic right-wing tricks: blaming the media, and defining the media as one unified thing, even when it isn’t.

The Web has attained a much greater influence in all of this than just the scary Drudge Report logo would suggest. Though many in the mainstream media might think of the ACORN story as a ‘Fox News thing’ (and the New York Times, until recently, didn’t think of it at all), it was broken by James O’Keefe on Big Government, Andrew Breitbart‘s upstart website. And the “death panel” meme — which really was a nasty, discourse-muddying smear — came from Sarah Palin’s Facebook note, not from a cable honcho. The “conspiracy,” then, consists of a lot of people and outlets simultaneously thinking that the same thing is interesting, with unnerving speed and focus.

If anything, in the new environment, Fox has become the news aggregator, not the other way around.