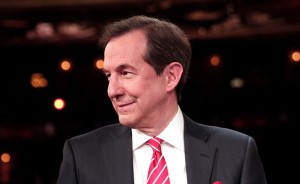 It’s already been a very big year for Fox News, and now Chris Wallace has officially become the first Fox News anchor to be given the privilege of moderating a general election presidential debate.

Wallace co-moderated the Fox News Republican primary debates with Megyn Kelly and Bret Baier, but it’s pretty newsworthy how the Democrats have agreed to a Fox News anchor moderating one of the debates.

Mediaite obtained a memo sent from Rupert Murdoch to Fox staff hailing the historic moment for them:

I am pleased to congratulate Fox News today as, for the first time in our 20-year history, one of our anchors has been chosen to moderate a general election presidential debate. Chris Wallace, who helped start the national conversation on the presidential race in August of 2015 by co-anchoring the very first primary debate to a record 24 million viewers, will now bring that conversation to a close by anchoring the last general election debate of the cycle. Less than three weeks before Election Day, Chris will moderate the final showdown between Donald Trump and Hillary Clinton. The debate will take place on Wednesday, October 19, at the University of Nevada in Las Vegas.

Chris, along with co-anchors Megyn Kelly and Bret Baier, performed superbly in numerous primary debates over the last several presidential cycles. Chris is widely recognized as a skilled and knowledgeable questioner who grills newsmakers of both parties with equal vigor and fairness. Today’s decision by the Commission on Presidential Debates is not only a tribute to Chris, but also a point of pride for all of us at Fox News.