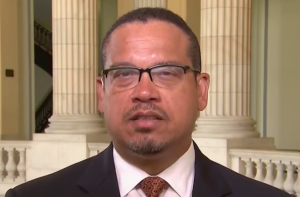 In an interview with MSNBC’s Morning Joe Friday, Democratic Congressman and the first Muslim elected to Congress Keith Ellison denounced former Speaker of the House Newt Gingrich‘s statement following the terror attack in Nice that that the U.S. should question everyone of “Muslim background.”

Host Mika Brzezinski asked Ellison to respond to Gingrich’s comments, but first he paused to condemn the attack. “Well, more important than my reaction to Newt Gingrich, my reaction to what happened in Nice is just pure sympathy and just absolute condemnation of that horrific murderous truck rampage.”

“What frightens me about his comments is I think he knows better,” Brzezinski put in.

“He does know better,” he agreed. “That’s the sad thing about Newt Gingrich, he’s a very smart man. It is just calculating, pandering, and it’s really sad.”