Must Reads: How Egypt is Outlawing Journalism
MUST READS

Must Reads: How Egypt is Outlawing Journalism 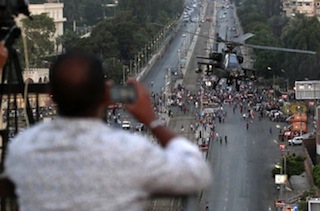 Every a.m., Mediaite publishes a primer of what the interweb machine is writing, talking, tweeting, and blogging about, so that you may fool friends and family into thinking you are a trove of information and insight. Today: the shifting roles of Ezra Klein, the woeful press situation in Egypt, and more.

The New Yorker’s Joshua Hersh fills in some of the blanks on the deteriorating press situation in Egypt, including this deflating detail:

The government’s suppressive tactics have been given vital support by the overwhelming complicity of the public, which has enthusiastically embraced even the most absurd claims about the foreign media. When an explosion went off outside Cairo’s police headquarters last Friday, foreign reporters were pushed away from the scene by hostile crowds, who threatened to beat journalists and steal their equipment. When crowds gathered the next day to mark the third anniversary of the start of the revolution, Egyptian journalists warned their foreign colleagues to stay home for their own safety: “If you absolutely must go downtown today,” one tweeted on Saturday, “put your cameras & notebooks away and keep moving.” More than a dozen foreign reporters were assaulted or detained over the weekend.

New York’s Benjamin Wallace tracks the rise of Ezra Klein, and the ambiguous spot he occupies between innovator and analyst. Full of tidbits like this one, about why Klein turned away from television despite a promising career there:

Even though Klein has a pleasant TV persona, you could see the tension between his desire to be good at hosting and the sense that it wasn’t the most comfortable fit. When a producer suggested that Klein ask Barney Frank about supposed anti-gay remarks made by Chuck Hagel, the nominee for secretary of Defense, Klein deflected: “I just don’t think that attack on Hagel is very interesting.” Later, he anguished over his opening line about Obama’s choice of Hagel. “I kind of want to write, ‘It was the worst day for neoconservatives since the day Vice-President Cheney shot a dude in the face,’ ” he said to me. “Which is a funny way to open the show. But I feel like, Do I need to poke Dick Cheney? This is the thing about TV that I do find hard: It rewards a sharpness that I wouldn’t use in my writing.”

BuzzFeed’s foray into accountability journalism is particularly encouraging at a time when so many traditional news outlets have cut back on the deeply valuable but expensive endeavor…It was always important to try to make investigative reporting arresting, or at least fathomable. But it’s more critical than ever today. In the digital era, as Schoofs says, “millions of other options are a click away.”

Jefferson wrote a lot of great pieces for Gawker, but here are two of my favorites: