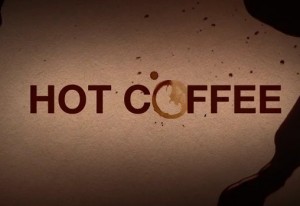 Every time you purchase a cup of coffee that carries the warning “Coffee is Hot,” you probably think about Stella Liebeck without even knowing it. She’s the woman whose lawsuit against McDonald’s has become the go-to parable for proponents of “tort reform.”

The McDonald’s coffee lawsuit has become pop folklore since the 1992 incident that started it all, but unlike most folk tales, Stella Liebeck’s story began to be distorted immediately, and it wasn’t through repetition, but by design. Everyone has probably made, or laughed at, a “hot coffee is hot!” joke at one time or another, but after you see this movie, you’ll never laugh about it again. I don’t want to spoil the film, so I will just say this: when the narrator asks people on the street if they’ve ever seen the extent of Stella’s injuries, get your kids out of the room.

Hot Coffee also examines the story of Colin Gourley, who suffered significant brain damage at birth due to several medical errors, and whose parents were unable to collect what the jury awarded them for his care because of a legislative cap on damages. It goes on to tell the story of Oliver Diaz, a then-Mississippi Supreme Court Justice who was inundated with attack ads from outside groups, then removed from the bench, for three years, by federal corruption charges of which he was eventually cleared.

Finally, the film tells the compelling tale of Jamie Leigh Jones, the Halliburton/KBR employee who alleges she was drugged and brutally gang-raped by colleagues in Iraq, then imprisoned by armed KBR guards in a cargo container. For years, Halliburton invoked a mandatory arbitration clause in her contract to keep the case out of court. After you watch the film, read about the start of Jamie Leigh’s long-delayed day in court, which began late last month.

Hot Coffee is more than just a compelling film. The issue of tort reform is something that I have been engaged with for a long time, dating back to my years as a health insurance consultant, but this film illuminates the subject in ways that were completely new to me. While some will dismiss the personal stories in the film as “manipulative,” they serve to illustrate the true consequences behind pithy catch-phrases like “jackpot justice.”

They also demonstrate the folly of cost arguments (that are factually unfounded, anyway) in restricting the rights of the people to seek civil redress. The campaign to demonize litigation has been so successful that people have forgotten that the civil courts are as integral to their protection as criminal courts, perhaps even more so. A single undeterred criminal is arguably not as dangerous as an undeterred reckless corporation, or an undeterred, careless doctor.

Whether you support tort reform or not (or even if you think it has something to do with fixing a pie), watch this film. Even if you think civil courts need to be reformed, this film will inform how you think that should be accomplished. There’s also a bonus appearance by Mediaite founder Dan Abrams, for good measure.

It’s airing on HBO, and is available On Demand. Here’s the film’s trailer: