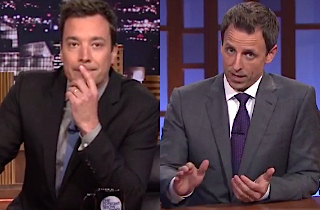 Jimmy Fallon and Seth Meyers each took a few moments during their respective NBC late night shows Tuesday to share their thoughts about the passing of comedy legend Robin Williams.

Fallon choked back tears are he described his admiration for Williams. “He was funny and he was fast,” the host said, before hopping up from behind his desk to do his best impression of the comic in action. “You are never going to see anyone like this human being ever,” Fallon said, calling him the “Muhammad Ali of comedy.” He shared a clip of Williams’ first-ever appearance on the Tonight Show Starring Johnny Carson before standing up on his desk and saluting “O Captain, my Captain, you will be missed.”

RELATED: How Robin Williams Helped Conan Get Over the Tonight Show Debacle

Later, Meyers recounted how he followed Williams’ career from the early stand-up albums through films like Dead Poet’s Society and Good Will Hunting. “The saddest part of this is that Robin was battling depression,” he said. “And if there is anything that we can do to honor his memory, I hope it would be to educate us more about this terrible affliction.”

Both Jimmy Kimmel and David Letterman have been on hiatus this week, but both have offered their remembrances on Twitter:

Robin was as sweet a man as he was funny. If you're sad, please tell someone.

Watch both videos below, via NBC: