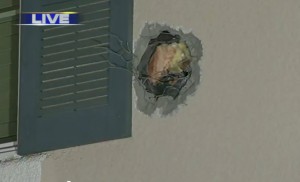 The reality show Mythbusters was filming an experiment involving a cannonball Tuesday in Dublin, Calif., when something went terribly awry. The fired cannonball ended up smashing two holes through a house, just missing a family that was asleep inside.

Sgt. J.D. Nelson, a consultant for the show, told Paul Thissen of the Contra Costa Times that the nearby firing range where the experiment was set up had been used in stunts about 50 previous times without incident. The cannon had been used three times in the previous two years for the show. He added:

“The cannonball was supposed to go through a few water-filled barrels and a concrete wall. Instead, it passed over the barrels, through the wall, and then took a very unfortunate bounce that sent the ball skyward.”

RELATED: Love Cougar Town And Hate The Price Is Right? Odds Are You’re A Democrat

The cannonball traveled about 700 yards from the range, went through one wall of a house, out another, and ended up smashing the window of a nearby van. According to Demian Bulwa and Henry K. Lee of The San Francisco Chronicle:

“[The Cannonball] exited the house, leaving a perfectly round hole in the stucco, crossed six-lane Tassajara Road, took out several tiles from the roof of a home on Bellevue Circle and finally slammed into the Gill family’s beige Toyota Sienna minivan in a driveway on Springvale Drive.”

On the bright side for the Gill family, they’re likely the only people in the world who can say that, “our beige minivan’s in the shop right now because it was struck by a cannonball.”

Enjoy a report on the incident below, courtesy of ABC: