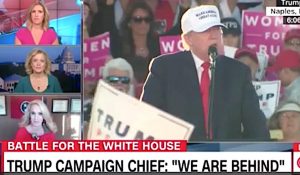 CNN’s Poppy Harlow locked horns with a Donald Trump supporter tonight while discussing the mixed messages on how the mogul’s campaign feels about election polls.

Scottie Nell Hughes was on tonight’s panel, and Harlow asked her about how Trump goes back and forth on the legitimacy of his polling numbers, particularly when polls no longer show him winning. Harlow made this point while addressing how Trump campaign manager Kellyanne Conway was asked today about whether she thinks the election is rigged, and whether she accepts that Hillary Clinton is ahead of Trump in several major national polls.

When Hughes argued that CNN and other polling agencies disproportionately get their results from Democrat participants, Harlow challenged her by asking flat out if she believes the media is skewing poll results. When Hughes answered in the affirmative, Harlow pressed her further by asking “what poll do you want us to show? name a poll!”

Harlow eventually asked Hughes whether she thinks the election is skewed, based only on what the polls say about the current state of the race. When Hughes deflected on Trump’s refusal to commit to the November 8 election results, she brought up the 2000 election Florida recount as a reason to be skeptical.

Harlow reminded Hughes that the election results that year were so close, that a recount was automatic under Florida law. She went on to say the it cannot be compared to how Trump is threatening to not follow through on the American tradition of conceding to the winner.

You can watch Hughes’ response above, via CNN.