Nancy Grace And Dan Abrams Argue Over Bob Ward Murder Trial: ‘Women Do Not Shoot Themselves In The Face!’ 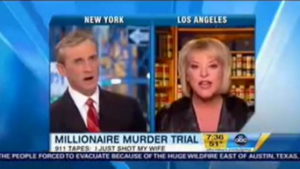 Mediaite founder and ABC News legal analysts Dan Abrams and HLN’s Nancy Grace went head-to-head this morning on Good Morning America, debating the Bob Ward murder trial taking place in Orlando. In a 911 call, Ward admitted to shooting his wife, but later backtracked, saying she killed herself while he tried to take the gun away from her.

Grace was suspicious of Ward’s defense that he came to his wife’s rescue. “I find it very interesting that he was trying to save her — what was she doing in her bedroom with a fully loaded Smith & Wesson revolver?” Grace asked incredulously. “I’m not buying into that. Also, take a look at his demeanor immediately afterward. While his wife is still lying there between the bed, shot in face, he’s on the phone very matter-of-factly saying, ‘Oh yeah, Diane’s dead.’ It’s very rare to hear a longtime love speak so coldly of a murder victim. I find that very unusual.”

“The reason she would have a fully-loaded gun, according to the defense, would be to kill herself,” explained Abrams. “That would be the reason for the first time she would’ve ever had a gun in that room.”

Grace was quick to point out that, historically in suicide cases, women don’t shoot themselves in the face. “Dan, have you ever looked at statistics of suicide-homicide? You will hardly ever find a woman shoot herself in the face. It just doesn’t happen, Dan!”

Abrams reminded Grace that this was not ruled permissible evidence by the judge.

“I know that, I know the judge said no, but I’m telling you that the jury doesn’t know that, we’re not in court, Dan, we’re talking about the truth,” Grace emphasized. “Women do not shoot themselves in the face!”

“Well, ‘he tried to stop her’ is going to be the defense, right?” countered Abrams.

Anchor Robin Roberts brought up footage of Ward joking around and dancing and asked how that would factor in the case.

Grace thought this was a damning piece of video, but Abrams disagreed. “I don’t think it’s going to be a make or break issue.” He added that the case was going to come down to what evidence the jury had to go on, but the big difference between this and the Casey Anthony case was that this one was starting from a taped confession.

Watch the segment below, courtesy of Good Morning America: