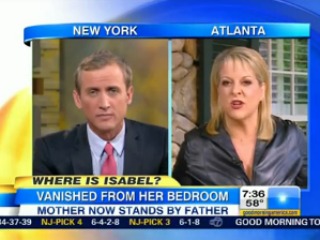 On Monday, HLN host Nancy Grace and ABC legal analyst / Mediaite founder Dan Abrams appeared on Good Morning America to weigh in on new developments in the case involving the disappearance of 6-year-old Isabel Celis. Celis’ mother recently came forward to refute suspicions about her husband, prompted by an announcement that he would be barred from seeing his two sons.

“I’m not prepared, based on the facts that we’ve got right now, to point the finger at anybody,” said Grace. “However, I don’t believe — and I thought about it a long time last night in preparation for this morning — that I ever had a single mother that could come to terms with the fact that her live-in, her boyfriend, her husband, her ex-husband had somehow hurt the child. They never seem to believe it.”

“The fact that Child Protective Services is stepping in here means there’s something that they found that suggests he’s not a good father,” added Abrams. “Ok, what that is, we don’t know. Is it connected to the case? We don’t know. But it’s a big deal for Child Protective Services to step in and say, you literally cannot be anywhere near your children.”

Later, Grace shared that she’d gone over the 911 call Celis’ father had made, as well as other times he’s spoken, with specialists.

“I don’t buy you analyze the voice and determine guilt based on that,” responded Abrams, pointing to cases where people have acted, publicly, in a way that suggests real anger or grief, only to be find guilty later on. “To suggest because someone calls 911 in a way most of us wouldn’t and to then talk about experts and voice experts,” he continued, “it just doesn’t mean anything to me.”

Grace wasn’t having it. “You know, I’ve heard that for so long from defense attorneys, Robin,” she said. “The reality is, I don’t know a single parent that when their child goes missing, laughs on the 911 call. Dan, when you ever have a child, maybe you’ll understand. When I lost [my son] John David for about 45 seconds in Toys ‘R’ Us, I’ve never felt such panic in my whole life.”

“That’s not the way the law works,” said Abrams.

“Oh, like you tried so many murder cases?” Grace shot back. “I can tell you right now, a 911 call will come into evidence, Dan.”

“I’m sure it will,” said Abrams, “but that doesn’t change the reality as to what we know and what we don’t know today. I’ll bet you, Robin, that the authorities know more than they’re telling us about the investigation.”

“Oh, wow, that’s smart,” said Grace, sarcastically. “Of course they know more. They tell us every day they’re not giving evidence out. We know they know more.”

“The good news is we don’t arrest people based on the tone of their voices in 911 calls,” Abrams concluded.

Update: Abrams took to Twitter to note the “jolt” he received sparring with Grace so early in the morning:

Have a look at what they had to say, via ABC. And please note that there are audio issues with certain portions of the video: