Nancy Grace And Dan Abrams Spar: ‘The Death Penalty Is Funny To You, But It’s Not Funny To Me’ 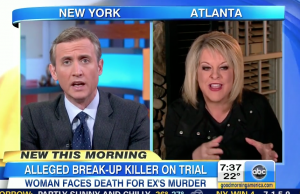 Things got heated this morning when HLN host Nancy Grace and Mediaite founder/ABC legal analyst Dan Abrams appeared on Good Morning America to discuss a case in which a woman is accused of murdering her boyfriend after he tried to break up with her.

Jodi Arias, 32, is accused of stabbing 30-year-old Travis Alexander 27 times, as well as shooting him, back in June 2008. The case is now going to trial — with Arias originally saying she didn’t murder Alexander, but later claiming self-defense — and the death penalty is on the table.

Claiming self-defense “is the kiss of death,” Grace asserted. Another problem the defense may have, she added, is that Arias may insist on taking the stand against her lawyer’s advise. “Remember, you’re talking about the winner of American Idol behind bars,” she said. “She loves the limelight.”

Abrams argued that the defense knows they’re “in big trouble,” and the self-defense claim is an effort to get second-degree murder. Arias is “effectively admitting that she did this,” he said, adding that it’s also an effort by Arias to say premeditation cannot be proved.

“They don’t need premeditation,” Grace countered, “because they also charged her with felony murder.” Grace then grew more incredulous, audibly laughing off screen, when Abrams asserted that the prosecution is “overreaching” going for the death penalty.

“The death penalty is funny to you, but it’s not funny to me,” Abrams responded. As the two talked over each other, Grace emphatically said, “She took pictures of him dead and naked in the shower” — adding, “Dan, you know what, save it. If you can name one case you’ve ever sought the death penalty on, you can tell me.”

Abrams said the death penalty “ought to be saved for the worst of the worst.” The Arias case, he said, is “a classic domestic violence case.” She should be charged with murder, but not face capital punishment.

“Because that was her boyfriend, that makes it less valuable?” Grace asked. “She stabbed him 27 times, and she took pictures of him, dead, naked, in the shower. She took her own crime scene photos, for Pete’s sake.” (Grace also replied to Abrams’ remark that she was laughing about the death penalty, saying, “I was laughing at what you said.”)

The two agreed to disagree… as they so often do.