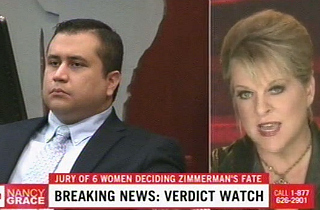 Watching Nancy Grace can be a painful experience, and so sometimes we miss her golden nuggets (like this one) while taking a break from her exhausting fire-and-brimstone delivery.

An anonymous reader points us to yet another bizarre on-air remark from Grace, dating back to Friday evening after the trial concluded and jury members began their deliberation.

After replaying defense lawyer Mark O’Mara‘s plea for the jury to let George Zimmerman “get back to his life,” Grace railed against such a thought:

Her guest for the segment was Zimmerman friend Frank Taaffe, whose response here could be considered just as strange.

UPDATE: As it turns out, Grace was referring to Zimmerman friend Taaffe’s own words from several days prior. While discussing the defendant’s weight gain on July 9, the pair had this exchange:

GRACE: What I’m asking is, is he consciously eating, gobbling down Ring Dings behind bars so he can then effectively argue to the jury that he’s too obese?

GRACE: He’s not going to Taco Bell because he’s been behind bars…

GRACE: He’s not going to midnight runs at Taco Bell.

Video below, via HLN: