Nancy Grace Goes Off on Darren Wilson: ‘It Doesn’t Add Up!’
VIDEO

Nancy Grace Goes Off on Darren Wilson: ‘It Doesn’t Add Up!’ 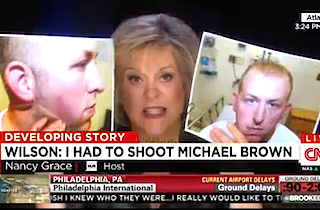 Nancy Grace joined CNN’s Brooke Baldwin to discuss the Ferguson grand jury decision Wednesday afternoon and she had a lot to say about Officer Darren Wilson’s version of the story, which has finally come out through his testimony and interviews. According to her, the whole thing “doesn’t add up.”

“When people say, it does not add up, I will tell you what doesn’t add up, these photos,” Grace said, holding up copies pictures of Wilson’s face after the shooting. “I’ve looked at a them, I’ve studied them, and I was expecting to see his face mangled.” She added, “He doesn’t even have a bruise. right? It’s red. He’s got a red mark!”

“Look, do you know how many times I have sided against a cop?” Grace asked. “Never. But to me, this is bigger than a badge. And I don’t like speaking out against a cop, but this doesn’t add up.”

Finally, Grace questioned Wilson’s assertion that all he wanted to do in the moment of the shooting was “live.” She said, “If you wanted to live, then put the pedal to the metal and drive when the guy is trying to jump in your car and grab your gun!”