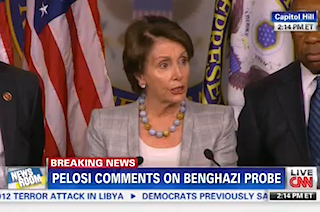 House Minority Leader Nancy Pelosi (D-CA) reluctantly announced her choices for the Republican-led committee to investigate the 2012 attack in Benghazi Wednesday afternoon, saying that while the probe was “not necessary,” the GOP had given Democrats no choice but to participate.

“We hoped that the House Republican leaders would not go down the path forming a select committee,” she said in a press conference. “We’ve already been there,” she added, citing the eight reviews conducted and 25,000 documents released. “It was not necessary to put the families or our country through this partisan exercise once again.”

“Regrettably, the Republican approach does not prevent the unacceptable and repeated abuses committed by Chairman [Darrell] Issa in any meaningful way,” she said. “That is all the more reason for democrats to participate in the committee, to be there to fight for fair hearing and process, to try to bring some openness and transparency to what’s going on.”

Pelosi said she easily could have gone the other way and decided not to lend any “validity” to the Republican effort. “But I do think it is important for the American people to have the pursuit of these questions done in as fair and open and balanced way as possible,” she said. “That simply would not be possible leaving it to the Republicans.”

As previously reported, Democratic Reps. Elijah Cummings, Adam Smith, Adam Schiff, Linda Sanchez, and Tammy Duckworth will join the committee, which is to be chaired by Rep. Trey Gowdy (R-SC).