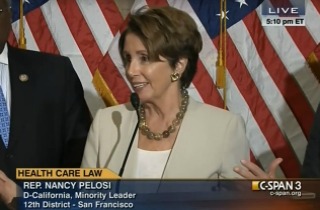 House Minority Leader Nancy Pelosi (D-CA) has entered the final, mortifying stage of denial where one flails feebly about in the desperate search for an argument that might generate some traction.

The spectacular collapse of Democratic standing in public opinion polls has prompted Democrats to voluntarily chip away at the very financial foundation of the Affordable Care Act – a prospect that any pundit would have deemed unthinkable just three weeks ago.

Democrats are terrified, but Pelosi, an old pro, never wants to let them see her sweat. To that end, during a press conference with her fellow Democratic leaders on Friday, Pelosi attempted to convince the media that there is very little outrage being directed at the Democrats to begin with. As a matter of fact, Democrats were undermining a foundational element of the ACA for no particular reason.

The minority leader began her brief remarks by apologizing for President Barack Obama’s apology. Why should he have apologized for something that was happening as virtually an act of God? That would be like apologizing to the Rockaways for Hurricane Sandy.

Apparently, spiteful insurance companies that dared comply with the law were simply trying to stick it to the president.

“Did I ever tell my constituents that if they like their plan they could keep it?” Pelosi later asked. “I would have if I’d ever met anybody who liked his or her plan, but that was not my experience.”

… Apparently – and I’m just throwing this out there – her experience was not sufficiently informative about what the nature of the public reaction would be to millions of Americans losing their health coverage and being asked to pay more for coverage they do not require. That is, presuming they can even secure new coverage.

A sentient being might even be able to anticipate that the majority of Americans would react poorly to being put in that position. It would probably serve Rep. Pelosi to consider, presuming her informal survey ever even took place, that her San Francisco district is apparently not especially representative of the broader public.

In fact, keeping that little tidbit in mind would greatly benefit her party’s members in the lower chamber.