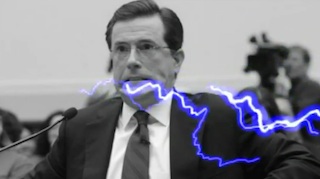 Much has been written in the past few months about how Stephen Colbert has been masterfully insinuating himself into real life politics with his Super PAC. Well, it’s about time for politicians to use him in return. Nancy Pelosi herself is using Colbert as a poster child to promote her the DISCLOSE Act, a bill designed to combat the Super PAC-allowing Citizen’s United decision. What’s fascinating though is that Pelosi’s Colbert-centered campaign doesn’t just use the comedian’s image, it tries to get in on the joke as well.

The campaign is called “Stop Colbert” and the Colbert in question isn’t the Comedy Central host but rather “Stephen Colbert” the character. On the campaign’s Facebook page and in a tongue in cheek video, Pelosi pretends to attack Colbert as a pro-Super PAC money hoarder, which is, of course, the fake position of the show’s satire. The video is even designed to emulate one of the parody Super PAC ads that the Report has been making in the past few months.

“Stephen Colbert used to be my friend. I even signed the poor baby’s cast when he hurt his hand. But since the day he started his Super PAC, taking secret money from special interests, he’s been out of control, even using his super PAC to attack my friend, Newt Gingrich. And if that weren’t enough, I hear he doesn’t even like kittens. Colbert must be stopped. I’m Nancy Pelosi and I support this ad because Americans deserve a better tomorrow today.”

It’s a smart choice from Pelosi. Honestly, Colbert and his show has done more in the last year to let Americans know about the negatives of Super PACs that, say, the Obama Administration could ever hope to (especially now). By positioning herself (we’re assuming from the slightly inferior production values on both the ad and Facebook page that Colbert’s actual team had nothing to do with this) as being both in on the joke and part of solution, Pelosi might be able to give the bill the Colbert bump it needs.

Still, just like Stephen Colbert will probably never actually run for office, there’s something a little uncomfortable to watching Pelosi try her hand as a comedian.