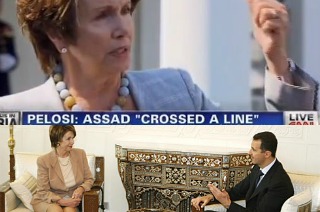 House Minority Leader Nancy Pelosi (D-CA) spent the holiday weekend gaming out Syrian intervention scenarios with her 5-year-old grandson. The ranking House Democrat told a group of reporters assembled outside the White House on Tuesday that her grandson, just out of toddlerhood, expressed his concerns that eliminating the ability of Bashar al-Assad’s forces to use of chemical weapons on civilian population centers cannot be reasonably considered a vital national interest and American intervention is, at this time, unjustified. Of course, the child used slightly more universally understood terms to express his opposition to the forthcoming war.

But Pelosi said that she supports intervention in Syria anyway, over the objections of her grandson. She defined America’s national interest in this case as the enforcement of the globally recognized prohibition on the battlefield use of chemical weapons. This, the first violation of this norm in the post-Cold War-era, demands a response that only the United States can deliver. Pelosi essentially told the press that the anti-war argument is a child’s argument:

The minority leader is joined today, albeit belatedly, by the GOP house leadership who expressed their support for the prerogative of the President of the United States to defend American interests with military force. Their support comes late, but that is better than never. That the GOP is supporting President Barack Obama at all is a miracle when one considers the precedents set by Democrats. One would expect the GOP to hold fast to their resistance to an unpopular military engagement championed by a president of the opposition party. It is a position not unlike Nancy Pelosi’s when Congress debated the ultimately successful Iraq “surge” in 2007.

In 2007, Pelosi took pride in the fact that she and other Democrats were asking “difficult questions” about an Iraq surge. As Speaker, she told the members of the House that it was the moral duty of America’s elected representatives to oppose further bloodshed in that conflict. Pelosi quoted famous Republican isolationist Sen. Robert Taft (R-OH) in that speech – a GOP politician who opposed American involvement in World War II, the establishment of NATO, and the Marshal Plan.

Two months after she delivered that speech, Pelosi traveled to Syria where she sat down with Syrian dictator Bashar al-Assad to discuss the Iraq war. Assad’s government was, at the time, actively supporting the insurgency in Iraq, funneling foreign fighters and equiptment into the “Sunni Triangle” with the purpose of killing American men and women. “We came in friendship, hope, and determined that the road to Damascus is a road to peace,” she told reporters as she toured the now war-torn streets of Damascus.

Republican leadership in Congress could justify their continued opposition to Obama’s proposed Syrian intervention under the guise of representing the will of average Americans. Pelosi’s unprincipled opposition to the Iraq War and embrace of anti-American co-belligerents was framed in those same terms.

But Republican leaders have apparently seen the light. They note that opposition to America acting in Syria when others cannot or will not is the right thing to do, historically and politically, and are lobbying hard to ensure that a vote to strike Syria does not fail in the House. They have not heeded their baser instincts and allowed Obama own the failure of his spectacular inept handling of the pre-Syrian intervention debate. The GOP leadership has opted not to sacrifice America’s credibility for cheap and fleeting political gain, as Pelosi did in 2007.