Napolitano: ‘Almost Inconceivable’ That Obama Can Carry AZ ‘After What He’s Done To Their Sovereignty’
Video

Napolitano: ‘Almost Inconceivable’ That Obama Can Carry AZ ‘After What He’s Done To Their Sovereignty’ 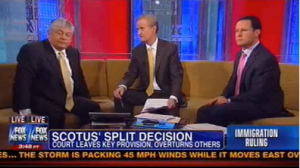 Judge Andrew Napolitano stopped by Fox & Friends Tuesday, where he weighed in on the Supreme Court’s ruling on Arizona’s immigration law and AZ Governor Jan Brewer‘s subsequent positive reaction to the “heart” of the law — the ability for AZ authorities to “stop and ask” people they suspect of being in the country illegally — being upheld.

“But with the Obama administration effectively vowing to ignore that law, what is left?” asked host Steve Doocy. “Will the law still work?”

“The heart and soul of the statute which is, when the federal government is not doing its job, the states can stand in the shoes of the federal government,” Napolitano explained, “that’s been thrown out. And the Supreme Court said that, with respect to immigration, that can’t be done. What Governor Brewer was happy about a few minutes ago has since changed.”

“But since she made that statement,” he continued, “the Obama administration said two things which will profoundly frustrate her and the good people of Arizona. They said we’re not going to tell the police the immigration status of people whose status we are aware of, and we’re not going to take the human beings. We’re not going to accept people from the police in Arizona who have immigration problems unless they’re charged with a felony. So basically, what remains of the statute is just a gathering of statistics.”

“If I could wear my political hat for a minute,” he said later, “I would say that the Republican party in Arizona should be very happy. It’s almost inconceivable that the President can carry that state this November after what he’s done to their sovereignty and their independence.”

He then explained that it’s not that the Obama administration isn’t upholding the law or ignoring the Supreme Court’s ruling but, rather, is “exercising discretion” to the extreme.