Napolitano On Entitlements: People In Charge, Like Obama, Know His Victory Is ‘Result Of Giving Cash Away Now’
Video

Napolitano On Entitlements: People In Charge, Like Obama, Know His Victory Is ‘Result Of Giving Cash Away Now’ 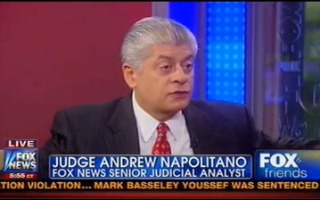 Judge Andrew Napolitano visited Fox & Friends on Thursday, where he discussed entitlement programs and their impact on the presidency.

“Did an entitlement explosion help the President lock up a second term?,” asked host Gretchen Carlson.

“We’re talking about a dangerous situation,” said Napolitano,”which, interestingly enough, was predicted 200 years ago by Thomas Jefferson and Alexander Hamilton, who said — and they rarely agreed on anything, but they agreed on this — when the public treasury become a public trough, their word, and when the voters realize this, they will only send to government people who will promise to bring back the bigger piece of the pie. And they never imagined that that number would reach fifty percent. When it reaches fifty and then goes over fifty, we have a situation where the half that receives from that, or the half plus one that receives from that trough has the legal tools with which to fill the trough from the pocket books and bank accounts of the other half.”

“The people that can control these things,” he continued, “right now, the President, know the short-term political gain that they can achieve — like his re-election victory two nights ago — as s result of giving away cash now. They don’t see that every that dollar they take away from taxpayers, whether they make a million dollars or a billion dollars, is a dollar less to invest in the economy and produce prosperity and jobs.”

“So this class warfare thing is going to on for a long time,” said Steve Doocy.

Yes, said Napolitano, adding that Bill O’Reilly was correct when he said that “people who want stuff are now a statistical majority of voters in the country.”