Napolitano Wary Of Obama’s Record On Free Speech: ‘So Much To Watch Out For’
Video

Napolitano Wary Of Obama’s Record On Free Speech: ‘So Much To Watch Out For’ 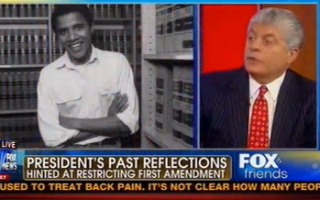 Judge Andrew Napolitano stopped by Fox & Friends Tuesday to share what he’d found regarding President Barack Obama‘s application of our freedom of speech.

“Does the President back the First Amendment in full?” asked host Gretchen Carlson, citing a report that, as a Harvard law student in the early 90s, Obama may have supported restrictions of the freedom of speech.

“I can tell you this as a former law student and former law school professor,” said Napolitano. People “sometimes say wacky things in law school just to test the idea.”

He was the editor in chief of the Harvard Law Review, which is the most prestigious position a student can have in all law schools in the United States, arguably, and he was sitting on a panel with a future Supreme Court justice, then judge, now Justice, Stepehen Breyer, and they were talking about whether or not it is appropriate to restrict speech on college campuses. this is 20 years age, and the topic of campus speech codes are being hotly debated. The President supported them. This supports the idea of authority restricting speech in order to prevent the listener from being offended by it.

Host Steve Doocy then presented a quote from Obama at the time: “I don’t see a lot of conservatives getting upset if minorities feel silenced.”

“This was an effort that was being debated at Harvard Law school which never adopted by the law school, although then student barack obama was apparently in favor of it,” Napolitano explained. Doocy responded that one would think a future president would be in favor of free speech for everyone.

Napolitano then pointed out that the President signed legislation permitting the Secret Service to restrict free speech. “There’s so much to watch for,” he warned.