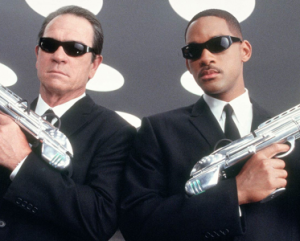 NASA news conferences–unlike, say, Angelina Jolie press availabilities–don’t ordinarily cause a clamor among reporters. Okay, sure, among some reporters, like space nerd Miles O’Brien, any new comet or solar flare’s going be a big deal.

But this? NASA’s got a news conference planned for Thursday–and it’s on the verge of going mainstream, baby! Why? Oh, perhaps it’s that memo line on the subject matter: NASA science geeks intend to “discuss an astrobiology finding that will impact the search for evidence of extraterrestrial life.”

As science rumor-debunker Phil Plait writes today on his Bad Astronomy blog, the “astrobiological finding” has immediately been translated in ubernerd circles as “a body from a crashed spaceship.” Or something:

That, of course, set everyone speculating. The very popular news site Kottke.org actually has a decent line of evidence on the topic of the conference, though a sensational headline of “Has NASA discovered extraterrestrial life?” Gawker has a post up about this as well, and social networks like reddit have a lot of people talking, too. Other examples abound.

So what’s the press conference about? I don’t know, to be honest, beyond what’s in the announcement. The scientists on the panel are interesting, including noted astrobiologists and geologists who work on solar system objects like Mars and Titan. So this is most likely going to be something about conditions on another moon or planet conducive for life.

It’s so tempting to think about everything we know changing at exactly 2 p.m. ET on Thursday, as the government finally comes clean on alien life forms (and perhaps even naming names, Men in Black style), but I’m not putting any money on a Larry King Live devoted to the first evidence of extraterrestrial life. (No, for the record I did not just imply that Larry King himself might not be human)

But hey, let’s wait and see, shall we?