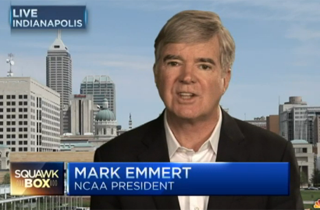 Two of the country’s biggest sports organizations, NASCAR and the NCAA, both released statements today condemning Indiana’s new religious freedom act for allowing businesses to discriminate against LGBT customers due to their personal beliefs.

In a statement, NASCAR said it was “disappointed by the recent legislation passed in Indiana.

“We will not embrace nor participate in exclusion or intolerance,” the organization’s chief communications officer, Brett Jewkes, said. “We are committed to diversity and inclusion within our sport and therefore will continue to welcome all competitors and fans at our events in the state of Indiana and anywhere else we race.”

The NCAA, which is headquartered in Indianapolis, also came out swinging against the law: during an appearance on CNBC’s The Squawk Box, president Mark Emmert said that the law “strikes at the core values” of the NCAA’s principles.

While he said that the Final Four tournament would continue to take place this weekend in Indianapolis, where the NCAA is headquartered, Emmert said it was only because anti-LGBT discrimination ordinances were currently in place in the city. However, should the law go into effect in its current form by July 1st, Emmert warned that the league would start having serious discussions about their future in Indianapolis.

“The members of the NCAA should be able to stop and say: ‘what kind of relationship do we want with the state of Indiana?'” he said. “We have to be able to conduct our affairs and hold our championships in an environment that reflects our core values of inclusion and diversity, and the members are going to have to make some hard decisions.

Watch Emmert discuss the law below, via CNBC: