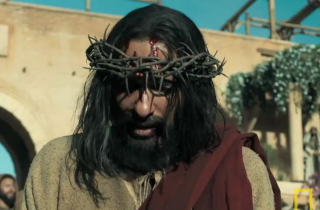 Tonight marks the miniseries premiere of National Geographic’s adaptation of the Bill O’Reilly book and bestseller Killing Jesus. However, according to one CNN reporter, negative coverage of O’Reilly is enough to get you kicked off the red carpet press list.

Tom Kludt, a media reporter for CNN, recently covered the controversy surrounding O’Reilly’s earlier reporting: whether he fabricated an account of witnessing nuns being executed in El Salvador, witnessed the suicide of Lee Harvey Oswald’s friend, or exaggerated his coverage of the Falklands War. (O’Reilly, for his part, has not retracted his accounts and Fox has stood by him.)

Thanks to that coverage, however, Kludt allgedly got kicked off the red carpet list for the premiere of the film, which stars Kelsey Grammer, Stephen Moyer, and John Rhys-Davies:

I was going to attend the red carpet event tonight for the premiere of "Killing Jesus," but a publicist just said my credential was denied.

National Geographic publicist said that after reviewing my coverage, they have declined my credentials "out of respect" for Bill O'Reilly.

As we were finalizing the carpet list, we realized that our red carpet was overflowing. CNN had numerous requests for credentials and we needed to limit it to one crew. So we decided to decline a reporter who by his own admission doesn’t cover red carpets. But we would like to thank Tom for bringing all this extra attention to our premiere tonight for “Killing Jesus.”

Kludt himself admits he has not covered a red carpet before:

I've never covered a red carpet before, so I'm a little bummed. :(

But he disputes NatGeo’s characterization of their exchange:

lol can someone please tell me if the "Killing Jesus" red carpet event tonight is actually "overflowing"? http://t.co/a3DtCuJ4Sc

The National Geographic publicist never once mentioned space constraints. She referred only to my "recent coverage on Bill O'Reilly."

Seriously, it probably would have been a lot easier if Kludt were just allowed to attend:

The irony is that my most recent piece on O'Reilly was a story today on how wildly successful his books have been http://t.co/s213ooRWAt