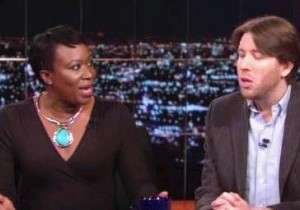 Republicans love talking about slavery if they can somehow accuse President Obama of being worse than it, but when it comes to recognizing the historical significance of actual slavery… well, not so much. On Friday’s Real Time with Bill Maher, a great example of this was on display when MSNBC contributor and Managing Editor for TheGrio.com Joy Reid mentioned slavery to refute the argument that the American Revolution was somehow exemplary, in comparison to the Arab Spring, and National Review writer Charles Cooke called the reference a “cheap shot,” opining that slavery was a “flaw” that rendered the Revolution “imperfect.”

Host Bill Maher was arguing that the Middle-Eastern dictatorships that have been overthrown during the Arab Spring are being replaced by Muslim theocracies, which, he argued, “are dictatorships themselves, aren’t they?”

Cooke responded that Americans “have a problem thinking about this” because “the revolution that happened here was great, and very rarely is that the case in the world.”

He explained, “You have this revolution in America in which the British fight the British, and then they codify classical liberal values in a constitution, and it’s great,” adding that in “normal” revolutions, “there’s bloodshed, and it’s horrible.”

Joy Reid countered that “The revolution in the U.S. was great, unless you were a slave, and there was a war in which 600,000 Americans had to die to make it better.”

“So, revolution isn’t always great,” Joy continued, “in the French Revolution, you had beheadings. Revolutions are messy, so if you want people to have democracy, it can be messy, right?”

“The slavery point, I think, is cheap,” Cooke responded.

“You mean the revolution in the United States that produced a government that included slaves, that included enslaved Africans, its a cheap shot, to include that in the narrative?” Reid asked. “Í mean, that is part of the narrative.”

“No,” Cooke replied, “the point is that of you’re looking for perfection in the 18th Century, you’re not going to find it. What the Americans did was a massive step forward, it wasn’t perfect, it was resolved in a civil war that was bloody and awful, but if we’re going to write off the greatest revolution, the greatest constitution in world history because it was imperfect and it was flawed, then we might as well all go home.”

This is the false choice that many white people grapple with. Joy wasn’t suggesting that we “write off” the American revolution, but there has to be some ground between that and acknowledging slavery the way you would a list of side effects in a Cialis commercial (May cause bloody civil wars and oily discharge. If you have a civil war lasting more than four years, contact your doctor immediately.)

Cooke is right, the American Revolution was a massive step forward, but it was a step taken on top of the broken, tortured, raped, and murdered bodies of slaves. Slavery was no mere “flaw” or “imperfection,” it was a crime against humanity, a crime that Cooke acknowledges we “still feel the legacy” of. Charles Cooke is also not your typical right-wing ignoramus; he’s from a mixed-race family, and believes strongly that black history should be taught on equal footing. The problem is, he thinks this can be accomplished simply by doing away with Black History Month. Tell that to Michele Bachmann.

That’s the problem with the lack of diversity in the media, that even the well-intentioned among the white people who dominate the media lack the perspective, the literal point of view, to assess issues of race. The white tendency toward cultural self-forgiveness was on bold display during the 2012 presidential election, in which the Republican candidate was never once asked about his leadership in an organization that had an overtly racist policy for half of his life. “That was the time,” they tell themselves, and the Founding Fathers are judged on the same curve.

As for Reid’s narrow point, the comparison with the Arab Spring, imagine how Cooke and co. would judge, say, the overthrow of Hosni Mubarek, if it had resulted in an orderly transition to a government that legally enslaved millions of Christians, or some other group, and was followed, generations later, by a sectarian civil war that resulted in hundreds of thousands of deaths. Of course, it would be Obama’s fault.