NBA Commissioner: ‘Beyond Anger’ Around League Over Sterling Situation 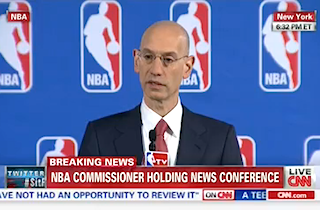 NBA Commissioner Adam Silver held a news conference Tuesday evening that was supposed to be about 2014 draft lottery, but, as could be expected, ended up centering mostly on the controversy surrounding L.A. Clippers owner Donald Sterling. Silver, who was hailed for his quick decision to fine and ban Sterling, delivered some impassioned remarks when a reporter asked him how it feels to have the Sterling situation dominating the sports media instead of the playoffs themselves.

To explain his feelings on the issue, Silver referenced the MVP speech made by Kevin Durant, who thanked his mother for helping him overcome discrimination and reach the highest levels of basketball excellence. “I think Kevin Durant as our most valuable player embodies what this league is all about, and frankly, Mr. Sterling doesn’t,” Silver said.

Addressing the “slippery slope” that could come from sanctioning Sterling, Silver said, “There’s something particular about race issues when it comes to sports, and maybe the NBA in particular. I mean, it’s no secret, we have a league that the majority of the players are African-American, the vast majority of the owners are not, but it’s as egalitarian an institution as there is anywhere.”

The reaction to Sterling’s comments is “beyond anger,” Silver said, describing a “certain sadness” and “almost a malaise around the league.” When he first met with the Clippers, said he sensed “something deeper than anger.”

“We’re not a post-racial society, but at least within the boundaries of my authority, you know, I feel an obligation to protect the people who are within this league,” Silver concluded.

Earlier on Tuesday, the NBA “initiated a charge” to terminate Sterling’s ownership of the Clippers, giving him until May 27 to respond. As CNN reported, “In order to terminate the Sterlings’ franchise rights, 75% (23) of the 30 team owners would have to vote to sustain the charge and force a sale.”