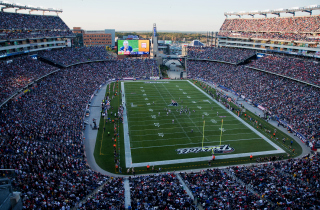 The kickoff of the NFL season may still be months away, but the behind-the-scenes preparation is already well underway. Not training camp, I’m talking about the ad buys for the Super Bowl of course -– the x’s and o’s that really makes the sport work.

While some ad-buyers may balk at the continuously rising prices, the number of viewers of the game has also continued steadily rising. This past year’s game set the record for the most television even in U.S. history with 111.5 million viewers, that coming despite the fact that it was a dreadful, uncompetitive contest in which Peyton Manning basically pooped his pants on the field. It was the fourth time in five years the Super Bowl has managed that feat.

“Ad buyers suggested the Peacock’s initial efforts might meet with some resistance,” Variety writes. “It’s $9 million to get a Super Bowl spot, which is a lot,” one ad-buyer told them. “They are testing the market. If enough people don’t do it, it’s only June and it’s not broadcast until February. You could adjust your price in October if you need to. It’s all about testing the market and maximizing the revenue.”

The reason prices continue to rise, despite the huge audiences for the game, is that, like live sports in general, it’s one of the last vestiges of the old style of TV viewing, one largely unaffected by DVR and internet viewing. And the yearly attention paid to the spots, in part because of their hefty price tag, has pulled off the ridiculous trick of getting people to be enthusiastic about the chance to sit around with friends and watch commercials for some reason. It’s also a sort of one-stop shopping for brands who believe they can cast the widest demographic net in one fell swoop.

But is it worth it? Perhaps we all had a favorite commercial or two from the broadcast this year, but can you even think of one now? I certainly can’t.

A study done of all of the 538 commercials that aired on the Super Bowl between 2000 and 2009 found that many of them just don’t end up working. There are a variety of reasons for that, but it could just be as simple as the old adage about trying to appeal to all of the people all of the time.

Interestingly, the same University of Wisconsin-Eau Claire researchers found that it may not even be the commercial itself that matters for the companies in question, but rather simply the idea that they’re buying a Super Bowl commercial in the first place. They found an increase in the stock value of companies that announced their plans to buy airtime, perhaps because it’s an indication to the world that the company is confident, strong, and has money to throw around. In other words, it’s our perception of the brand that matters more than what they deliver in the end, something a lot of NFL teams are well aware of themselves.