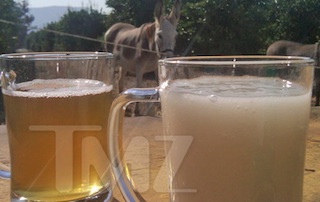 Obviously, we as a culture are on the brink of collapse. Where, at one point, American creativity was personified by Mark Twain and the invention of jazz, now we have Kim Kardashian and the invention of vajazzling. Basically, we are finished. All we need is that last push, that one last event to send us flying over the edge and into the pit of own making. And, recently, news has surfaced that NBC has elected themselves as the ones to put American society out of its misery. However, at the last minute, the network has changed its mind, opting to postpone our creative death till another time.

Clearly, this is the most important stay of cultural execution since ABC canceled Work It.

Last week, TMZ broke the news of the upcoming episode, posting a picture sent to them of two pitchers (one of urine and one of semen), apparently taken when the “stunt” was filmed last summer. As the picture hit the Internet, the entire country let out a gasp! Wait, I’m sorry. It wasn’t a gasp. It was a groan and a sighing exclamation of “I’m surprised they haven’t done that already.”

Anyway, apparently someone at NBC heard these sighs. Today, The New York Times reported that the episode, which was set to air tonight, will not be shown. This is a good thing. Seriously, if NBC had found time to air this but not time to put Community on their mid-season schedule, they’d deserve to be the last place network.

You want to know what the funniest part of this story is though? Somewhere, there’s a Fear Factor contestant reading this news and realizing they drank donkey semen for nothing.

Watch the initial report of the story from TMZ below: