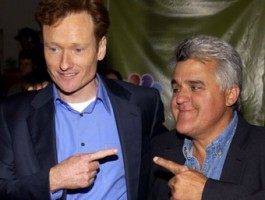 TMZ reported earlier today that, according to unnamed sources; “Jay Leno is going back to his 11:30 PM time slot, and it’s looking like Conan O’Brien is the odd man out.” This came after rumors hit the Internet earlier in the day that Leno had been canceled. While nothing has been officially announced, Bill Carter reports that NBC executives “did not deny a report posted by the website TMZ that NBC was considering making the switch and replacing Mr. O’Brien at “Tonight” with Mr. Leno.”

NBC executives held discussions with both Jay Leno and Conan O’Brien Thursday about the future of the network’s late-night lineup. And while executives said that no final decision has been made, they did not deny that the network is considering moves that could include returning Mr. Leno to his old job as host of “The Tonight Show.”

NBC executives said a decision would definitely not be announced Thursday but did not deny a report posted by the website TMZ that NBC was considering making the switch and replacing Mr. O’Brien at “Tonight” with Mr. Leno.

TMZ reported that NBC would make the move soon to take advantage of the natural break in its schedule when it covers the Winter Olympics next month.

The late-night discussions at NBC are directly related to pressure that has been brought on NBC by its affiliated stations, which have seen ratings for their 11 p.m. local newscasts plummet this television season because of much-weakened lead-in audiences from the network in the 10 p.m. hour.

Pressed by affiliates and shrinking ratings, NBC has a plan in the works to radically alter its late-night television lineup, restoring Jay Leno to his old spot at 11:35 each weeknight, while pushing the man who replaced him, Conan O’Brien, to a starting time of 12:05 a.m.

The third NBC late-night star, Jimmy Fallon, would then begin his show at 1:05 a.m., the executives said. The revised lineup would go into effect after NBC concludes its coverage of the Winter Olympics on February 28. NBC will pre-empt both its prime-time and late-night lineup for more than two weeks to cover the Olympics, creating a natural break in which to implement the late-night changes.