NBC Meteorologist Caught in an Awkward Position on Live TV

NBC meteorologist Mike Seidel wasn’t quite ready for a live shot on Saturday, and so got caught on television in an, um, awkward position: 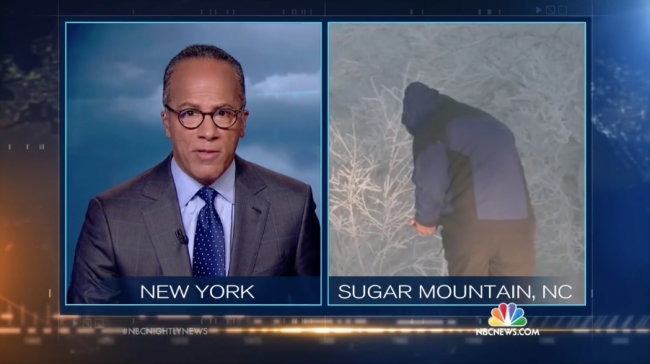 Does that look a bit like he’s relieving himself to you? Because that was the consensus from viewers who saw it live:

Did I really just see #NBCNews catch Mike Seidel off guard while relieving himself on Sugar Mountain, NC? #newsblooper

Mike Seidel was taking a piss on the national NBC nightly news from snowy sugar mountain. Someone needs to put this on the Internet

Was Mike Seidel taking a piss on NBC Nightly News ?

What a week. First #ChevyGuy Rikk Wilde and now Mike Seidel taking a piss on NBC Nightly News. Obviously they had no #TechnologyAndStuff

NBC Nightly News just threw it 2 Mike Seidel whose back was 2 camera. He turned around pulling on a glove. Looked like he was taking a pee.

Seconds after Lester Holt cut to Seidel, someone shouted at him to turn around. And you can hear Seidel asking why, just before Holt realizes he’s not ready yet and moves on.

NBC did comment on the incident, telling the New York Daily News that Seidel had dropped his phone and was not taking a whiz in the woods.

You can watch the moment here, via NBC: