NBC News Beats The Competition, Is First To Report Correctly That No Arrest Made In Boston Bombing Case
video

NBC News Beats The Competition, Is First To Report Correctly That No Arrest Made In Boston Bombing Case 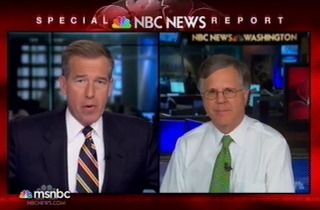 Amid a frenzy of reporting on Wednesday that a suspect had been arrested in the Boston Marathon bombing case, NBC News stood out as the only network reporting that no arrest had been made. In the face of increasing evidence that they were incorrect, NBC News stuck to their guns and insisted that there had been no arrest. Within minutes, it became clear that NBC News was the only network to get the story right – no arrest had been made in the Boston bombing case.

At approximately 1:45 p.m. EDT, CNN broke into programming to announce that an arrest has been made in connection with the bombing of the Boston Marathon.

Soon after this, Fox News reported without confirmation that officials had made an arrest of someone who could be a suspect in the Boston bombing. The Associated Press ran with details about how a suspect was in custody and was presently en route to a federal courthouse.

At 1:54 p.m. EDT, NBC News broke into MSNBC’s programming where justice reporter Pete Williams contradicted every major reporting outlet and declared that there had been no arrest made in connection with the Boston bombing.

At 2:13 p.m. EDT, NBC News sends programming back to MSNBC. There, reporter Jonathan Dienst repeats that no arrest has been made in the bombing case and that federal officials, either with the FBI or the Department of Justice, will soon confirm that they have not made an arrest in the case.

After this report, CNN begins to walk back their earlier reporting that a suspect in the bombing case had been arrested.

By 2:44 p.m. EDT, a statement released by the Department of Justice confirmed that no arrest had been made.

At 2:52 p.m. EDT, MSNBC anchor Tamron Hall read a statement from the FBI requesting that the media “exercise caution” when reporting on supposed breakthroughs in the Boston case, and to check with “appropriate channels” on their leads if they are unclear whether they are true. This statement was clearly not directed at MSNBC or NBC News.