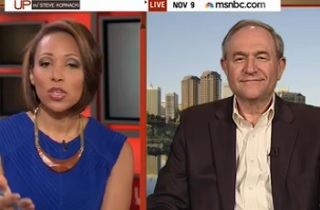 The problems with Obamacare’s rollout, both real and imagined, have given Republicans the luxury of not having to answer any questions about the law. On Up with Steve Kornacki this weekend, NBC News correspondent Mara Schiavocampo did ask a Republican the question that every reporter, pre-and-post-rollout, should be asking every Republican about the law, but almost never do: “If Obamacare is not the right way (to reform health care), what is your alternative?”

Although they’ve done everything up to and including threaten a US government default to undo Obamacare, Republicans are rarely asked what their plan is (even though Obamacare actually is a Republican plan), and when they are asked, the results are revealing. Sometimes, you get the tried-and-true “sell insurance across state lines,” which destroys even existing patient protections, or restricting your right to sue doctors who maim or kill you, or tell you to go to the emergency room. Sometimes, they’ll just pretend they have an alternative that’s actually just the way thing already were. But sometimes, you get something else.

It’s a great question just on its merits, but also because sometimes, you want to watch your conversational caloric intake, and a light, refreshing word salad is the only thing that will do. Former Governor Jim Gilmore (R-VA) did not disappoint.

Referencing the popular Republican crocodile refrain that the former governor invoked earlier in the segment, Schiavocampo said to Gilmore “You say that everybody wants better health care, and everybody wants more individuals covered, but we need to find more innovative ways to do that. If Obamacare is not the right way, what is your alternative?”

Gilmore’s response is a lightly-dressed collection of verbal field greens:

Give Gilmore points for originality, because this is the first time I’ve heard anyone suggest “self-insurance” as a way to reform health care. Maybe Gov. Gilmore thinks that self-insurance will automatically appeal to conservatives because it has the word “self” in it, like self-deportation, but it has absolutely nothing to do with insuring the uninsured. Self-insurance refers to group health plans (for people who get their insurance through work) that are self-funded, which means that instead of an insurance company actually paying the dollars to doctors and hospitals for employees’ claims, the company they work for pays them. They’re usually administered by an insurance company, which charges the employer a fee for that service.

Self-insurance is also not new, but it does put employees at significant risk. Self-funded plans are exempt from many state insurance regulations, including important patient protections, and a requirement to maintain a cash reserve sufficient to pay unexpectedly high claims.

As it happens, they are also exempt from many of Obamacare’s provisions, which, ironically, means that Gov. Gilmore’s “alternative” to Obamacare is actually expected to be encouraged by Obamacare.

Gilmore pulled off the rare feat of both offering a solution that has nothing to do with the problem, and one that’s already in place.

More journalists should ask Republicans this crucial question, because despite its rocky start, and despite its inadequacies (which include self-insurance loopholes), Obamacare is a hell of a lot better than anything else that’s on offer.