NBC News reporter Ayman Mohyeldin spoke firsthand to MSNBC yesterday about an Israeli attack on a Gaza harbor that killed four children and injured three more. Mohyeldin was one of many reporters who witnessed the attack from a nearby hotel, and later tweeted in detail about the fatalities:

4 Palestinian kids killed in a single Israeli airstrike. Minutes before they were killed by our hotel, I was kicking a ball with them #gaza

A #Palestinian mother reacts to the news that her son was one of 4 boys killed in Israeli shelling of #gaza seaport pic.twitter.com/2LdGY5p9GU

Maybe it’s the fact that I walked on that beach—and have a small child that makes this photo so devastating. #Gaza pic.twitter.com/s067RShbVh

But by Wednesday evening, NBC had removed him from Gaza entirely. According to Glenn Greenwald, who spoke to sources at the network unhappy with the decision, NBC removed him for “security concerns,” though NBC News foreign correspondent Richard Engel was reporting on the conflict later in the day.

Mondoweiss noted that the reassignment came shortly following Mohyeldin’s criticism of the State Department on Twitter and Facebook, criticism that was later deleted: 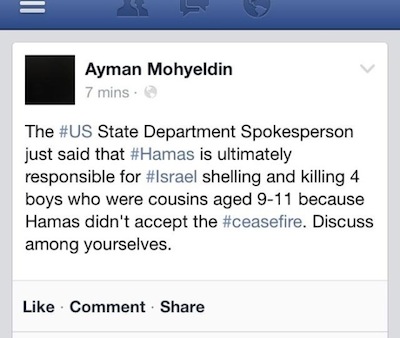 Mohyeldin, who came over to NBC News in 2011 after a star-making turn at Al Jazeera, has spoken before about the need to recognize Palestinian authorities and “rein in” Israel.

Mediaite has reached out to NBC News for comment and will update accordingly.