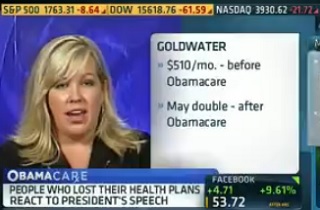 On Thursday, LA Times reporter Michael Hiltzik debunked yet another Obamacare horror story, revealing that a woman who appeared on CNBC Wednesday will actually pay less, for better coverage, under Obamacare. During that same CNBC segment, 38 year-old Heather Goldwater spoke about her difficulties in signing up for a plan to replace the one that was just canceled, but as has been the case with every TV news report on the health care law, there’s much more here than meets the eye.

Heather Goldwater is better known to her friends and neighbors as Ryan Nelson, former host of ABC4’s Lowcountry Live! and current owner of a successful PR firm. On Wednesday’s Closing Bell, she explained to host Maria Bartiromo that she received a letter in July informing her that her $510 /mo. Cigna health insurance policy was being canceled, but that the company would be sending her a letter in October with replacement options.

“It’s almost November 1 and I have not heard a word but they are cancelling my policy at the end of the year, 2013, and I can’t get on a website that works,” Nelson told Bartiromo, adding that “They’re not giving me any information. They told me don’t do anything, you just stay back. That situation, I’m a little worried.”

During her segment, an onscreen graphic proclaimed that her old $510 premium “May Double – After Obamacare.”

Ryan Nelson’s complaint is a legitimate one, and one which was also included in the Lisa Myers NBC News investigative report that the White House pushed back so hard against:

“I’m completely overwhelmed with a six-month-old and a business,” said Goldwater. “The last thing I can do is spend hours poring over a website that isn’t working, trying to wrap my head around this entire health care overhaul.”

Goldwater said she supports the new law and is grateful for provisions helping folks like her with pre-existing conditions, but she worries she won’t be able to afford the new insurance, which is expected to cost more because it has more benefits. “I’m jealous of people who have really good health insurance,” she said. “It’s people like me who are stuck in the middle who are going to get screwed.”

There’s no doubt that the difficulties with the rollout of Obamacare have caused anxiety for consumers like Ryan Nelson, and hers is an example of why Americans need to be given clear and accurate information about the new law. She, along with many other Americans, don’t necessarily have the time and energy to figure all of this out. In an extensive email exchange, Ryan told me that “I haven’t spoken with anyone at Cigna yet. I am a new mom and my business is very busy, and although it’s extremely important that I contact them, I too was counting on them to send me some details as they explained in the letter they sent me when they canceled me.”

“Honestly, when the NBC producer found me,” she added, “it was from a tweet I sent to the local healthcare reporter months ago, I never planned on it getting much attention. But I have plenty of people in my same situation who are wondering what in the world to do. And with a website that is slow and sometimes not even working, it’s hard on many of us…even though some people just think of us as the 5%.”

There are a few pieces of good news for Ms. Nelson. According to Cigna, the letter she was promised has been delayed (in five states: SC, NC, FL, TN, and CT), but will be sent out between November 10 and November 15, and will include options that comply with the Affordable Care Act. As Ryan points out via email, it would have been nice of them to let people know about the delay.

The other good news is that, in the meantime, there are 8 other Bronze and Silver plans available on the federal exchange that are cheaper than the plan that was canceled, and all of them will cover maternity, prescriptions, and other essential services, and will not charge extra for preexisting conditions, of which Ryan has several.

While consumers don’t always have the time, energy, or expertise to do research like this, investigative reporters and news producers do. There’s little excuse for people like Lisa Myers and Closing Bell‘s news producers to claim that premiums for Obamacare plans are “expected to cost more” or “May Double” when checking on those claims is a relatively simple matter, as news research goes. Ryan Nelson has told at least three reporters about her troubles with Cigna, yet none of them thought to spend five minutes calling the company. That is simple and pure negligence.

What goes beyond negligence is the fact that Ryan told NBC News producers and reporters key details about her story that they chose to omit, including this doozy about the plan that Cigna canceled: it didn’t cover maternity care, for which she paid nearly $16,000 out of pocket this year. She also told me that the $510 premium for her Cigna plan had been jacked up from $465 this year, and that the plan only covered her, not her husband and new baby. “I definitely believe there should be healthcare reform and honestly, I’m glad the reform is happening,” she told me. “The fact I am a successful woman business owner, yet had to pay out of pocket close to $16,000 to have my daughter felt like I was the one being punished. So yes, reform is necessary.”

She also told me that when she left ABC4, she tried to COBRA her group health benefits at $484 /mo, but Blue Cross Blue Shield of South Carolina denied her coverage because of several preexisting conditions, “Which is why I am glad to see that preexisting conditions can no longer be used against you.”

Cigna did cover her conditions, but Nelson “had to do a phoner with a nurse, who was very nice I may say.”

Ryan Nelson’s story isn’t a simple one. Although she stands to pay less in premiums, while enjoying patient protections and essential services that her old plan did not, there could be some tradeoffs; her old deductible was $2000 in-network and $4000 out-of-network, while the comparably-priced Obamacare plans have somewhat higher deductibles, but lower out-of-pocket maximums, and Cigna hasn’t yet told her what they will offer.

“I’m not blaming the President because of this,” she added. “and of course there’s going to be problems in the beginning when you change. You have millions of Americans scrambling to one website….you should expect the thing to crash. It’s like everyone trying to get on one subway. It’s just not going to happen right away. However, if they knew problems with CMS were going on, they should not have given insurers and the insured a deadline. Part of my job is creating websites for clients, you know you should always expect bugs in the first weeks of launch. And then throw millions logging onto it = recipe for disaster.”

“I think that when they wrote the law, there should have been an addendum that said If the insured wants to keep their policy the way it is, even without the options required, and the insured will sign off, they should be allowed,” Ms. Nelson said. “All I want is to have coverage I can afford, where I can continue to see doctors I have an established relationship with and not pay $100 for each prescription. Is that too much to ask?”

As for NBC News, Nelson says that producer Hannah Rappleye “had planned for it to be an on-air piece, but it got pushed to the web. I think she really wanted to make it more in-depth but I only got the two blurbs.”

A former TV pro herself, Nelson is more forgiving. “I don’t think there was enough time for them to report all of it honestly, as there’s just so much,” she said. “As you can tell, figuring out the plan should probably be the length of a Dateline. For NBC Hannah definitely did a lot of questioning. For CNBC, Bonnie also asked tons of questions. Sometimes in TV, there’s such a brief period of time to tell such a long story.”

The fact that the report appeared online, where the ink is unlimited, is all the more reason that these key details should have been included. In a story that was supposed to be about people being canceled off of insurance that they liked, it seems difficult to justify suppressing the fact that Nelson’s plan left her holding the bag for $16,000, or that they jacked up her premium by almost 10%, or that she stands to pay less under the Affordable Care Act, not more, while enjoying protection from the sort of practice that caused her to lose her COBRA coverage. It’s not that NBC News didn’t ask, or didn’t know; Nelson says she told them about the rate hike and the maternity care, and they did include a half-sentence about preexisting conditions. CNBC should have, at a bare minimum, have checked on the Obamacare premiums before making the claim that they might double.

Those facts don’t do anything to undercut Ryan Nelson’s central complaint, they buttress it. The fact that these reforms are so important to her specific situation makes it that much more urgent that the Obamacare website and Cigna get their acts together. That wasn’t the story that NBC News wanted to tell though.