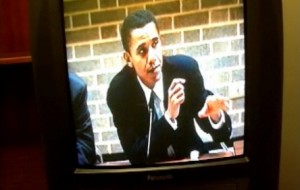 A 1998 comment by then-State Sen. Barack Obama regarding “redistribution” has been disseminated as a way to blunt Mitt Romney‘s “47%” remarks from earlier this year. While other news organizations ran with the version of those remarks that was distributed by the President’s opponents, NBC News made a decision to stop running the clip until it could be verified. That caution has been partially vindicated, as NBC News’ Michael O’Brien reports that they have obtained video of the comment in question that includes context that was omitted in the more widely-distributed version.

After the truncated version of Obama’s remarks ran once on MSNBC’s The Daily Rundown, a decision was apparently made not to run the clip again until it could be “authenticated,” and while the President’s campaign later verified it was his voice on the tape, the discovery of this longer version bears out the decision to wait. From NBC News’ Michael O’Brien:

Mitt Romney’s campaign this week has pounced on a 14-year-old clip of Obama speaking about “redistribution” in October 1998 at a conference in Chicago, in which the future president seems to extol the virtues of redistributing wealth.

Yet NBC News has obtained the entirety of the relevant remarks, which includes additional comments by Obama that weren’t included in the video circulated by Republicans. That omission features additional words of praise for “competition” and the “marketplace” by the then-state senator.

In the whole clip, Obama says:

I think the trick is figuring out how do we structure government systems that pool resources and hence facilitate some redistribution because I actually believe in redistribution, at least at a certain level to make sure that everybody’s got a shot.  How do we pool resources at the same time as we decentralize delivery systems in ways that both foster competition, can work in the marketplace, and can foster innovation at the local level and can be tailored to particular communities.

Such caution is rare in the speed-kills era of the microscopic news cycle, so it is fair for NBC and MSNBC critics to ask whether such circumspection would have been applied if the subject had been a Republican like Mitt Romney. On that score, MSNBC’s Rachel Maddow reported, Monday night, that she had seen the controversial video of Mitt Romney’s May fundraiser weeks ago, but did not run it because it could not be authenticated.

It’s also fair to ask whether this added context substantially changes the meaning of what Barack Obama said in 1998. While the word “redistribution” is a trigger word for conservatives, even the shortened version of these comments places Obama firmly in line with Mitt Romney on the issue of redistribution, which Obama said he believes in “at least at a certain level to make sure that everybody’s got a shot,” while Romney bragged about his father’s receipt of welfare during a speech last night, telling the crowd “my dad had to get help, financial help, the government helped his family be able to get on their feet again. By the way, that’s the way America works, we have great hearts, we care for people who have needs.”

The welfare Romney’s father received was, of course, the exact sort of income redistribution that so enrages conservatives, the kind that goes to help poor people.

Also lost in the cacophony over the 1998 remarks is the fact that he says “I actually believe in redistribution” because he’s defending his own ideas on how to lessen it, ideas that have a markedly Republican sound to them, especially in the portion that was originally omitted. People don’t use the word “actually” unless they believe the listener needs convincing, as in “I actually don’t hate kittens.”

That’s more than a subtle difference, but what’s really needed is for the media to educate the public about what “redistribution” actually means, and what forms it takes, while also explaining that Mitt Romney believes in income redistribution, at least at a certain level.

Here’s the clip of then-State Sen. Barack Obama’s extended quote from an 1998 conference at Loyola University, from NBC News: