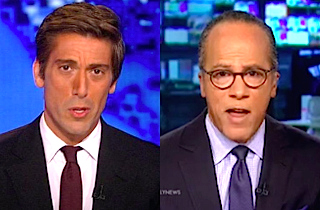 NBC Nightly News got some good news of its own this week as its Brian Williams-less broadcast added viewers week-to-week with Lester Holt in the anchor chair.

Compared to the previous week, NBC’s ratings were up 7% in total viewers to 10.103 million and up 11% in the 25-54 demo to 2.554 million for the week of February 16-20. It was only the fourth time this season NBC averaged more than 10 million total viewers for a week, a feat that neither ABC nor CBS has achieved.

However, it was not enough to stop ABC’s World News Tonight with David Muir from overtaking NBC in the demo for last week. That program lost in total viewers with 9.697 million, but won the demo with 2.571 million. CBS remained in third place with 8.497 million total viewers and 2.025 million the demo.

Last week marked the tenth time this season that ABC beat NBC in the weekly demo ratings, the most times in 18 years. ABC was also up 7% in total viewers week-to-week, but saw a larger 15% increase in the demo, helping it take the lead in that important category. Compared to the same week last year, ABC is up 21% in total viewers and up 16% in the demo while NBC is down 3% and 2% respectively.

By maintaining the lead in total viewers last week, Lester Holt helped extend NBC’s winning streak to 283 consecutive weeks. How much longer could it be before ABC’s Muir interrupts it?