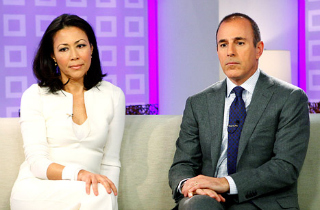 According to the Daily News, NBC is seeking to repair Today host Matt Lauer‘s public image by having him and deposed co-host Ann Curry publicly dine together.

The paper’s Marianne Garvey indicated that NBC sources told her that the network’s executives want the pair to lunch at Michael’s in Midtown Manhattan as a way of publicly displaying a non-hostile relationship after the Curry firing fueled for rumors that a controlling Lauer had her removed from the show.

“When the ratings fell after Ann, there was no more public ‘Matt’s really nice,’ and the bosses now need to do damage control,” the source told the paper. “Matt’s beloved inside and they want to help him.”

“It’s terrible; every time they try to do something to fix this, another Ann story pops up,” a source continued. “Their biggest mistake was letting her burst into tears on air and her saying she wasn’t able to carry the ball, shifting the blame on Matt.”

Lauer’s reputation among his staff is reportedly stellar, and the source insisted that “he knows every cameraman, every crew guy. He turns up for staff weddings and he’s very loyal.”

Since Curry’s firing, media reports have popped up claiming Lauer was a driving force behind her removal, leading to a public perception of the popular host as a cold, calculating TV anchor. Previous attempts at damage control have proven futile, the source said: “They even issued that statement saying Matt had nothing to do with Ann’s firing, but nobody cared, because Matt’s the face of the show.”

Whether or not Curry is open to the lunch remains to be seen. The source told the Daily News: “For now, she is resisting. If it was easy to do, it would have happened by now.”