NBC Reporter On Hillary Clinton’s Hospitalization: ‘There May Be More To This Story That We Don’t Know’ 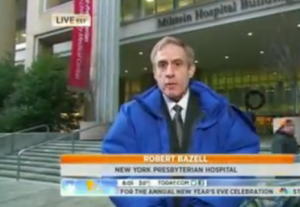 NBC News’ chief science and health correspondent, Robert Bazell, remarked on Secretary of State Hillary Clinton‘s recent hospitalization (for a blood clot) on Monday. Questioning the link between the clot and her earlier concussion, Bazell said there may be more to the story.

“We really don’t know a lot about what’s going on here,” Bazell said. The hospital “is not saying much,” he added, and the statement from Clinton’s office says she’s being treated with blood thinners for the blood clot that stemmed from her concussion.

“The problem is that concussions, when they lead to blood clots — the bloods clots are not usually treated with blood thinners, as they say she’s being treated. If she has a blood clot that occurred because she was sitting around or something, they would treat that with blood thinners, and that would be fine. But there may be more to this story that we don’t know.”

We’ll have to keep watch over the next few days, Bazell noted.

“She is being treated with anticoagulants and is at NewYork-Presbyterian Hospital so that they can monitor the medication over the next 48 hours,” spokesman Philippe Reines said in the statement. “Her doctors will continue to assess her condition, including other issues associated with her concussion. They will determine if any further action is required.”

Clinton was admitted to the hospital on Sunday night.