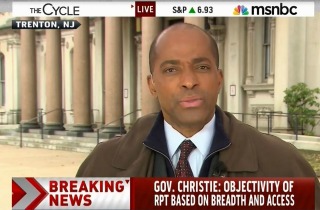 The hosts of MSNBC’s The Cycle were not impressed by New Jersey Gov. Chris Christie’s second marathon presser in the past several months following the release of the findings of an investigation which exonerated the governor and made recommendations regarding how to avoid future abuses like what occurred on the George Washington Bridge in September. But while the MSNBC hosts were not enthusiastic about Christie’s performance, NBC News reporter Ron Allen said that the governor’s combative demeanor with the press corps probably scored him points in the “Republican heartland.”

“At this point, there is no hard evidence, there is no documented allegation that he did, in fact, know, or say, or do something that initiated this,” Allen said. He added that, until there is an allegation which implicates Christie in the lane closures, “he’s going to continue to do what he’s been doing.”

Allen added that this includes holding long press conferences with reporters and empowering commissions to investigate the incident.

“If you’re watching this beyond the state of New Jersey out there in the Republican heartland, this probably looked pretty good to you,” Allen continued. “Here’s this guy who’s got a lot of personality, who’s beating down on the press, calling their questions stupid and so forth – not a direct quote. They love that out there in some parts of the Republican heartland.”