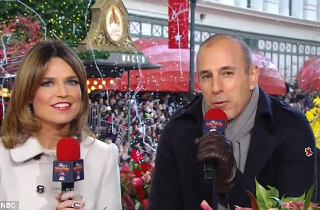 Today Show host Matt Lauer was largely panned by NBC viewers for what they believed was a tired and sloppy hosting of the Macy’s Thanksgiving Day Parade.

The New York Post aggregated many of the harsh Twitter assessments aimed at Lauer. “Matt Lauer should get a lifetime-achievement award for saying ridiculous things with deadpan, absolute sincerity,” tweeted one viewer. “Way to go Matt.”

The anti-Lauer sentiment became more palpable with the “gotcha” moment when he mispronounced a song title while introducing Matthew Broderick and Kelli O’Hara’s performance from their current Broadway musical Nice Work If You Can Get It.

Lauer botched the Gershwin brothers-penned song title — “‘S Wonderful” — pronouncing it as a literal “Ess wonderful,” rather than the flowing “S’Wonderful.”

The mispronunciation caused a Twitter fury, with people calling the NBC host an “idiot,” saying that Gershwin would be “thrashing in his grave,” and coining a new hashtag: “#lauerfail.”

Other tweeters seemed to believe Lauer was sloppy because of age (he’s 54!) and fatigue. Love him or hate him, these over the top critiques of Lauer are representative of a new vocal chorus of media critics who are often angry and have no problem making the attacks personal.

Among the other vitriol directed at Lauer: viewers tweeted asking whether there was a way to mute Lauer’s voice during the parade; others said his performance left them in “complete disgust.”

Sheesh. You would think they were talking about coverage of the fighting in the middle east or the election, rather than a voice over of which kid friendly floats, balloons and songs were coming next in a celebratory parade.