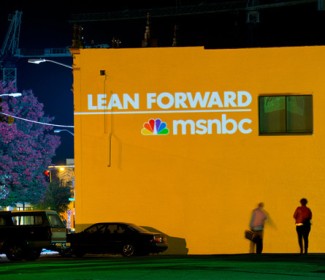 As we reported last week, Microsoft and NBC News have parted ways, with NBC purchasing back and taking full control of MSNBC.com — the network’s online home — rebranding it as NBCNews.com. A report on the rebrand appears on the newly-dubbed NBCNews.com, and one line in particular sticks out in terms of offering further insight into the decision for the two companies to part ways:

In recent years, MSNBC TV has shifted toward political commentary favorable to Democratic and liberal causes, creating a potential clash between that mission and the website’s goal of producing a nonpartisan news report.

This is noteworthy because MSNBC TV certainly does not officially characterize or promote itself that way. The network has been adamant about describing itself as a sometime (but not at all hours) opinionated network, but one that is a fair and factual news network overall, and certainly not one devoted to simply “favoring liberal causes.” In fact, a Politico report from March of this year highlighted the difference between the network’s straight news and “point of view” programming, specifically noting that “MSNBC considers everything from 3 p.m. into primetime to be ‘point of view’ shows.” (It’s worth noting that Mediaite had previously questioned this particular divide in the network’s programming.)

That said, MSNBC president Phil Griffin has also described the network as “really the place to go for progressives.” In an interview with Mediaite, Griffin later said that while the network’s audience “has a progressive point of view,” it’s ultimately “not an ideology, because we differ often in how we get there, but it’s challenging all the status quo and trying to figure out how to make the world better. It’s challenging what’s going on in Washington. We’ve got smart people, and they do their research. But yes, we do have a sensibility and we embrace it, but we’re about ideas.”

“We come from a progressive stance,” he had told us, “but that’s a wide berth.”

The online report goes on to quote Jennifer Sizemore, VP and editor in chief of the digital network, saying that, “No one will dispute that we have a bit of a brand confusion right now with cable as a commentary product and msnbc.com as a comprehensive news site.”

Again, we’re not so sure that the cable network would agree with this characterization, as all signs point to it seeing itself as primarily a news product with added commentary, not one devoted primarily to commentary and opinion.