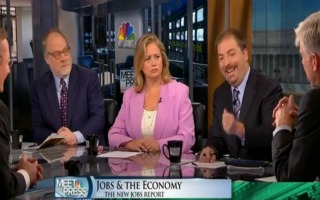 On Sunday’s Meet the Press, NBC News Senior White House Correspondent Chuck Todd lashed out at wealthy and influential people like real estate mogul Donald Trump and former General Electric CEO Jack Welch promoting conspiracy theories about once-trusted institutions like the Bureau of Labor Statistics and the Federal Reserve. Todd said that these individuals are driving him “crazy” because they are perpetuating the “corroding of trust in our government.”

NBC anchor David Gregory played a clip of Welch on MSNBC’s Hardball on Friday in which he claimed that it was hard to square the significant drop in unemployment with the stagnant growth of economic activity.

Former House Speaker Newt Gingrich said that Welch’s take on the drop in unemployment said less about him than it did the way in which President Barack Obama’s administration has conducted itself.

“The President of the United States is so deeply distrusted by people like Jack Welch, who’s hardly a right winger – Welch is one of the most successful businessmen in America — that Welch instantaneously assumes this is the Chicago machine,” Gingrich said.

“This is really making me crazy,” Todd said, cutting Gingrich off.

The Federal Reserve gets questioned now for politics these days. The Supreme Court and John Roberts get – we have got, we have corroded – what we’re doing, we are corroding trust in our federal government in a way. And, one-time responsible people are doing to control it. And the idea that Donald Trump and Jack Welch, rich people with crazy conspiracy theories, can get traction on this is a bad trend.

“I assume, David, there are a number of people that believe the real unemployment report is somewhere safe in Nairobi with the president’s Kenyan birth certificate,” said former White House Press Secretary Robert Gibbs. “I agree with Chuck. It’s incredibly dangerous – and we wonder why institutions in this country are – the perception of institutions in this country is failing because people go on TV and just make stuff up.”

“We have mainstreamed ‘when did you stop beating your wife,'” Todd lamented.

Watch the panel segment below via NBC: