NBC’s Chuck Todd to Obama: How Can Americans Trust Obamacare When ‘You Keep Changing It?’
VIDEO

NBC’s Chuck Todd to Obama: How Can Americans Trust Obamacare When ‘You Keep Changing It?’ 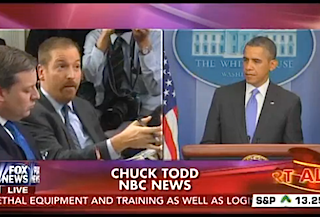 During a year-end press conference to touched on everything from the NSA surveillance programs to President Barack Obama’s new years resolutions, NBC News’ Chuck Todd was the first member of the White House press corps to ask a specific question about the Affordable Care Act. Given the long-list of adjustments to the law since it was implemented on October 1st, Todd wanted to know how Americans can still have “confidence” in it.

Todd’s question came shortly after the administration exempted those whose policies were dropped by health insurance companies due to Obamacare restriction from next year’s individual mandate. “You’ve talked about the issues with health care and the website rollout, but there have been other issues, the misinformation about people keeping their policies, the extended deadlines, some postponements,” the reporter said. “We have a new waiver that HHS announced last night. How do you expect Americans to have confidence and certainty in this law if you keep changing it?”

President Obama rejected Todd’s suggestion that he “might as well have just delayed the mandate” for all Americans, because the new rule actually only applies to a “very specific population that received cancelation notices from insurance companies.” He added that “we just wanted to make sure that the hardship provision that was already existing in the law would also potentially apply to somebody who had problems during this transition period.”

The president used Todd’s question to address a “broader point” about the rollout of the Affordable Care Act. He said that in a “big project” like this one, his team is “constantly looking” to see “if there are adjustments that can be made to smooth out the transition,” but only if they don’t go against the “core of the law.”

Stressing benefits like parents’ ability to keep their children on their health plans until they are 26 and prescription drug discounts for seniors on Medicare, Obama said, “if [Obamacare] were to be repealed, you would be taking away all those benefits from folks who already are enjoying them.”