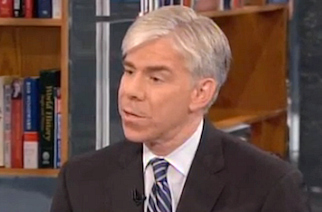 Meet the Press host David Gregory grilled Republican Governor of Michigan Rick Snyder on the possibility of a federal bailout for the city of Detroit, which filed for bankruptcy this week despite Snyder’s appointment of emergency city manager Kevyn Orr.

Snyder tried to lend perspective to Detroit’s feduciary woes: “The bankruptcy is about the unfunded portion of the pension liability—which is still significant, I don’t want to underestimate it—but the funded piece is safe.”

“The role of federal government is an obvious question here,” Gregory said. “The federal government has intervened when the auto companies needed a big bailout. You go back to the 1970s and that famous headline of the New York Daily News when New York was in trouble: ‘Ford To City: Drop Dead.”

Gregory contrasted Detroit’s relatively small amount of debt to the bailout given to the automotive industry following the 2008 financial collapse.

“You had $80-plus billion that flowed to the auto companies when they needed help,” Gregory said. “Now you’ve got a total debt in Detroit of $18 billion. Is there not some money that should be available, even from that initial bailout money to the auto companies, to help the cities?”

“I’m not going to speak for the federal government,” Snyder said. “I view they can be an important partner in solving problems…but this isn’t just about writing checks.”